Buhari is too soft – Sagay 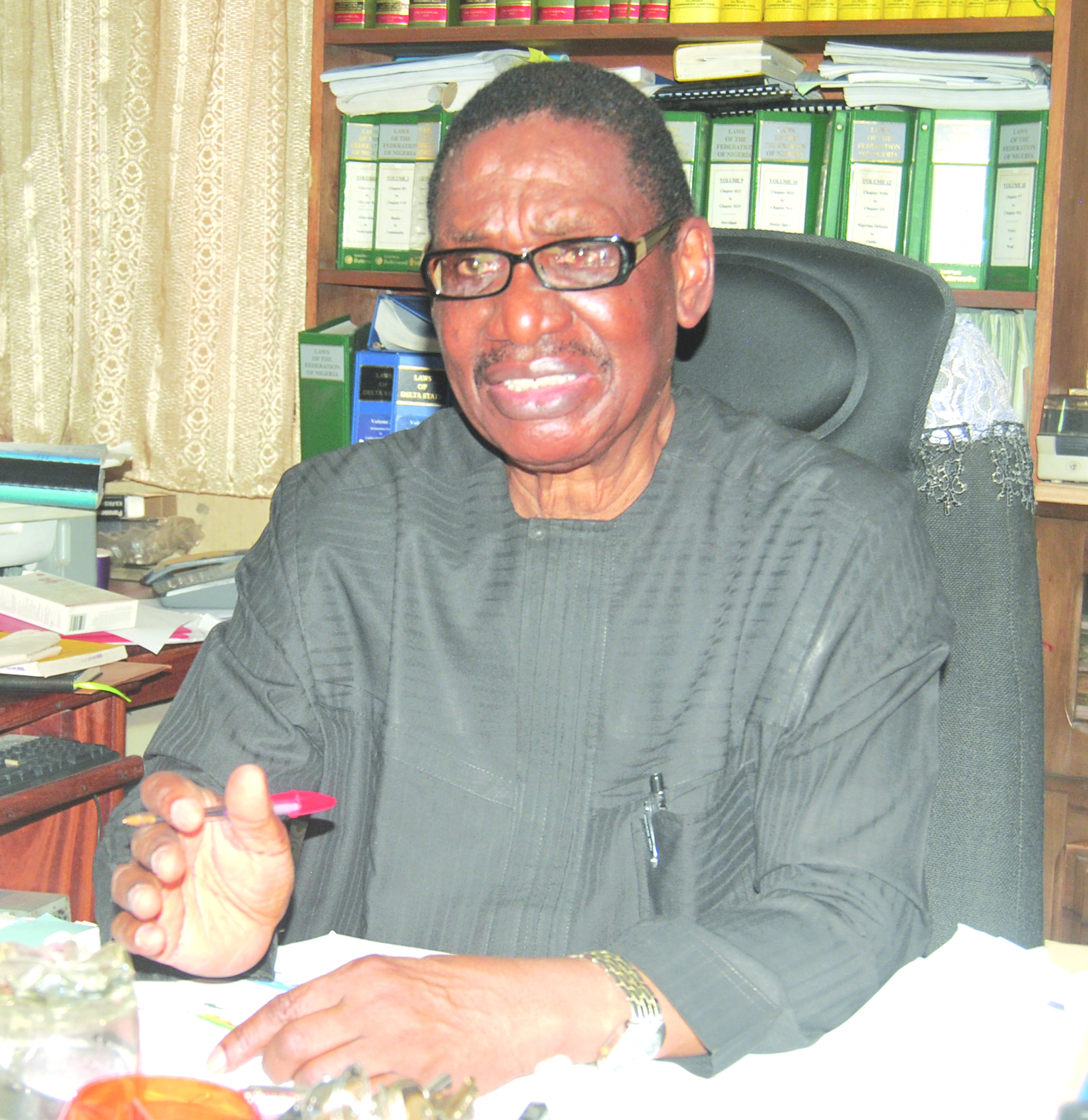 Professor Itse Sagay, Senior Advocate of Nigeria (SAN) and chairman, Presidential Advisory Committee against Corruption needs no introduction. He has led a life of consistent activism for justice and development in Nigeria. The respected legal luminary speaks to Dike Onwuamaeze, associate editor on the activities of his committee and gives an appraisal of the ongoing war against corruption being spearheaded by the administration of President Muhammadu Buhari. It is vintage Sagay. Excerpts:

As the chairman of the Presidential Advisory Committee against Corruption, how has your committee been assisting government in the on-going anti-graft war in the past six months?

It has been an interesting experience. A lot of work is involved. Basically, we create programmes that promote and sustain the anti-corruption struggle and make it more effective. We want the new Administration of Criminal Justice Act to operate effectively. To that extent, we have interacted with judges in various states and discussed the law to enlighten them on their powers under the law, which has been enacted to address the problems of the old law. I will give some examples. This new law does not allow you to adjourn a case because of an appeal.You cannot adjourn because there is a preliminary objection. No! You take the two together. You cannot stop a case as a judge because you are promoted to a higher court. You stay and conclude the case you are already hearing. And you have to hear the case on a day-to-day basis till it is concluded. You cannot adjourn a case for one month and when it resumes, you adjourn for one year. These are some of the things this new law enjoins. We had to introduce these things in the new law because in the past, these Senior Advocates who come to defend the suspects have made a specialty of frustrating the whole process of trial by bringing in one objection after the other.

Secondly, we are trying to improve the capacity of the Economic and Financial Crimes Commission (EFCC), the Independent Corrupt Practices and Other Related Offences Commission (ICPC) and the Code of Conduct Bureau (CCB). We are preparing a prosecution manual, which will give the prosecutor the step-by-step process for prosecuting so that we can have the highest possibility of success. So, we talk of effective investigation, efficient prosecution, speedy adjudication and effective sanctions. This will ensure that at the end of the day, we have a package that has the best chance of success. We hope that within six months, a case can be disposed of. We are also working on making plea bargain more effective to save cost and resources while it does not allow a criminal to go away with his loots and without any punishment.

How will you describe the kind of corruption that pervaded the officialdom in Nigeria before the inception of the Buhari administration?

Corruption in Nigeria is paralyzing. It is overwhelming. Nobody would have thought that some people could just get together and decide to squander every kobo in the national kitty. That was what they did. They just turned the whole national treasury into a bazaar. It is just unbelievable.

(…Cuts in with laughter). It was an exaggerated interpretation of what I said. People were complaining that the arrests and prosecutions were selective. I responded by asking: does it matter? For me, the issue is this: are you liable or not? Instead of quarrelling about selectivity, if you are liable, why don’t you come and confess? The man who is saying that there is selectivity is saying “yes, I looted, but there is another man who also looted that you have not invited.” So, bring your loot first and we will deal with you gently before we invite the other man. That was what I was saying.

Are you satisfied with the methods being used by the EFCC and ICPC?

There is now energy. There is zeal. There is passion. You can see that the EFCC has come alive. A new life has been pumped into the various anti-corruption agencies and there is determination to resolve this situation and save this country from economic collapse.

How will you react to the allegation that President Buhari is spending more than 70% of his time looking into allegations of corruption involving public officers who served under his predecessor instead of focusing on the economic problems confronting the nation?

People who say that are armed robbers. Are they saying that billions and trillions of Naira loots should just go away like that so that we can look forward to penury? I don’t really understand that.

The Buhari government has been accused of not obeying the rule of law in its fight against corruption. Dasuki, for instance, is still in detention despite having been granted bail.

I have heard that, but the facts do not support the allegations. Yes, bail has been granted in some cases, but before the release, he would be arrested on fresh charges because the offences are so many. Dasuki’s offences are just endless. The list of financial offences committed is endless, so, as he is getting bail on one, another one is revealed for which he has to be re-arrested. That is the problem. It is a serial criminality that we are dealing with here.

How do you feel about the level of impunity among some Nigerian public officers who made corruption a way of life?

I feel a deep sense of sadness. One, we have been retrogressive. There is no question about that. I have observed Nigerian politics and government from the First Republic. I was a young university student in the First Republic, so I was consciously following the Abubakar Tafawa Balewas, the Awolowos and the Azikiwes. You will find that in terms of ethics, principles and integrity in governance, you cannot compare any subsequent government to the First Republic politicians.They are like angels now compared to the people who came after them. Maybe, because they were brought up under the British! The only pleasure they derived, for which they struggled, was to serve. They wanted power in order to serve. The question of material gains just didn’t occur to them. They had honour and integrity. They were stately people in the way they talked and carried themselves. Now, all these are gone! Morality is gone. Ethics is gone. Integrity is gone. Even parliamentary comportment and language are gone. I’m sorry; this era is controlled by mainly riffraffs. You see a degenerating process from one republic to the other.

But the republic we have now (laughs) is a republic of catastrophe when we think of the kind of human beings we have. The types of politicians we have currently are from the dark ages. Look at the National Assembly where they are earning a monthly average of between N15 and N20 million whereas 66% of Nigerians are not earning up to two dollars a day. You can see why the struggle to acquire power is so intense and devastating that in Rivers State, they can kill and step through blood to power because what they will control at the end of the day is so much that it totally covers their conscience. So, the quality of politicians these days is less than zero. Otherwise, how can you say that you are governing a country and then you become a company of rats eating all the resources of the country, sharing them among yourselves and not caring what should happen to your country?

Top military officers who were supposed to protect the country shared all the monies meant for acquiring weapons and paid billions of Naira into the accounts of their wives and children and sent their juniors to go and die in the battlefields without arms. They will collect $30 million for a helicopter and use $3 million to buy a rickety helicopter and soldiers will die in the air. I don’t think we have human beings now. The barbarians have taken over.

Some people hold the view that the battle to heal Nigeria cannot be won until the constitution is changed?

Personally, I do not think that what is wrong is the constitution. It is lack of capacity to wage war against corruption. But in a sense, Nigeria has concentrated too much power in the centre. So, everybody is like bees going for the honey pot at the centre. My view is that this country needs restructuring. We need to implement federalism more effectively. We are not yet federal. There should be fiscal federalism. We are governing this country as a semi-unitary system. But I do not think that constitutional amendment is essential to fight corruption. What we need is one leader with integrity, which luckily, we have now.