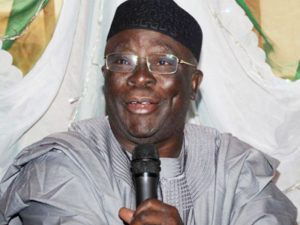 Afenifere, the Yoruba socio-political has debunked the claim by President Muhammadu Buhari that he has taken Nigerians out of poverty, describing the statement as one of the propagandas of the All Progressives Congress (APC) and the Buhari regime. This was made known by the leader of the group Pa Ayo Adebanjo who spoke with Sunday Tribune, noting that the president is number one enemy of the country and that Nigerians, are pained about the incompetence and lack of vision of the Buhari administration.

He identified the constitution as the main problem of the country and the moment President Buhari refuses to change it, he said, he will remain the number one enemy of the country. He said, “Are you a Nigerian? Have you been in the country since the last six years or you are just arriving? What is your answer to that? That’s not true. It is part of his exaggeration. That is part of the propaganda of the Buhari regime and the APC. The country is so pained about their incompetence and lack of vision but they did not admit it.

“All the things they promised before they came into power, which of them did they achieve? How much was dollar when they came in, how much is it now?

“What was the standard of education when they came in and what is it now? These are the perimeters you go by and then you answer to his claims?

“It is unfortunate that we have an illiterate as a president and he is demonstrating it. “Instead of listening to learned people around him, he is forcing his illiterate vision on the people and that is why we are having trouble.

“Unfortunately the people that led us to him are not talking now. Is it not Tinubu that led us to him? Somebody who has a manifesto on restructuring is now asking us what it stands for. Somebody who set up a committee on restructuring in his party still doesn’t know what restructuring is. And you people believe he is telling the truth. He is just pretending, Buhari cannot change this country. All that he has been saying is embedded in the constitution. It is the constitution that gives him all the powers that makes him the most powerful president in the world.

“Is it not the constitution that created more states and local governments in the North than the South which is used as the basis for revenue distribution?

“The problem of this country is the constitution and until we change it, we will not get out of our problems. Are you telling me that Buhari does not know that the constitution he is using is fraudulent?

“Buhari is the number one enemy of Nigeria’s unity and that is why he is doing everything in words and deeds to break the country. Right now, he has sent non indigene policemen and soldiers to the South and West to be killing everybody. Have you not heard about that he queried?”