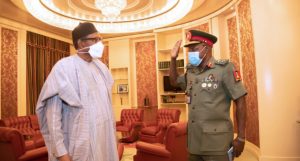 President Muhammadu Buhari yesterday called for synergy among security agencies as a step towards combating the deteriorating security situation in the country.

The president charged the new Chief of Army Staff, Major General Farouk Yahaya, to bring his experience to bear in bringing stability to the polity as the security architecture of the country was under serious pressure.

Buhari spoke in Abuja when the Minister of Defence, Major General Bashir Magashi (rtd), presented Yahaya to him. He expressed confidence that the new crop of service chiefs would tackle insecurity in the country.

Speaking to reporters after meeting with the president, the minister assured Nigerians that there will be some security changes as soon as possible.