Bringing rural women to the frontline 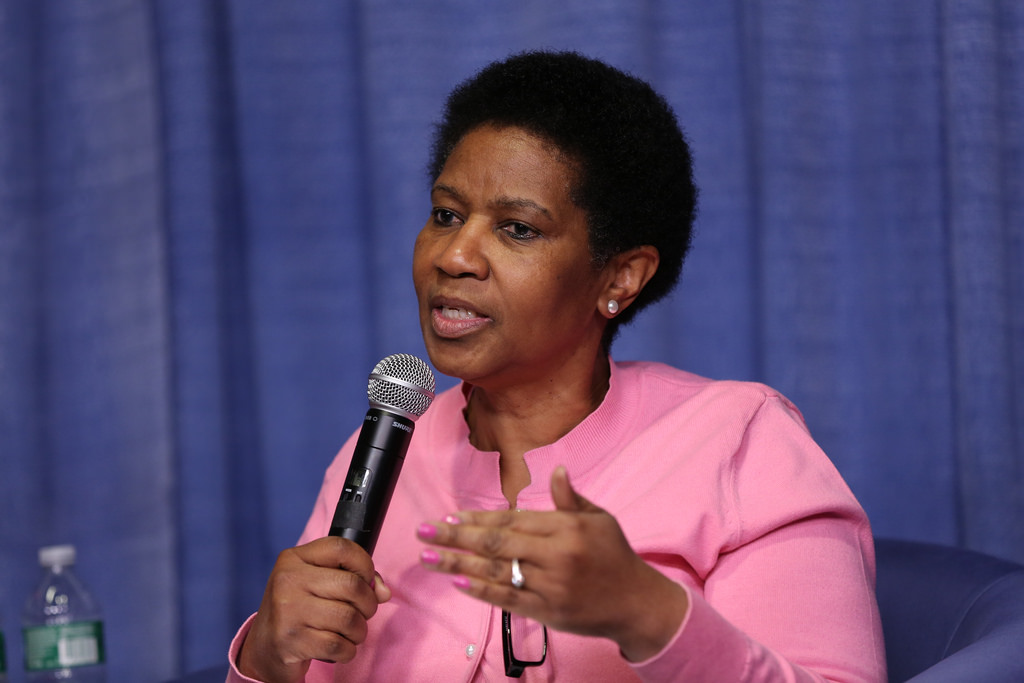 Phumzile Mlambo-Ngcuka, United Nations Under-Secretary-General and executive director of UN Women, recently began a second term in office. In her first term, she drew attention to women’s issues globally, getting some countries to change gender discrimination laws. In this interview with Africa Renewal’sKingsley Ighobor, Ms. Mlambo-Ngcuka discusses her vision and the hurdles that African women continue to face.

Africa Renewal: What were the key accomplishments and challenges of your first term?

Phumzile Mlambo-Ngcuka: In the last four years, we focused on encouraging countries to pass legislation and adopt norms that enhance gender equality, to the point that annually we helped pass laws that address domestic violence or criminalise rape in more than 60 countries, and where these violations are tolerated or not punished, we challenged countries to amend or repeal those laws. We still have about 150 countries with legislation that discriminates against women. We have strengthened the trust between governments and us [UN Women] as an honest broker. Of course, we could do with more resources.

Are there African countries that have reduced or eliminated gender discriminatory laws?

Yes, we are proud of Malawi for passing legislation that changed the age of marriage [to at least 18 years], outlawing child marriage. In Kenya there are legal and electoral reforms that enable greater participation of women in politics. Egypt passed laws to facilitate women’s participation at local government levels, and we saw an exponential number of women standing for and winning elections.

What are you focusing on next?

Implementation of laws. Since Beijing [the World Conference on Women, 1995], countries are passing laws that address gender inequality, but the impact has not been great because of weak implementation, and as a result, the norms and traditions that the laws address have not changed. In the last two years, we have been working with traditional chiefs and the religious community at the grassroots level to change the norms. We are also working with men and boys as stakeholders and role players in changing discriminatory norms and practices.

What do you mean by discriminatory norms and practices?

For example, people will say, “We believe in human rights, but we have our traditions.” But community leaders are helping to address those issues. In Zambia, for instance, there is a chief who, after the government passed a law to raise the age of marriage to 18, raised the age of marriage to 21 in his district. He says at 18, a girl is supposed to go to university, not get married. In Uganda, the president emphasized the importance of education for girls in the fight against child marriage. Uganda passed a related law, and they are working on community-based initiatives to make the law a success. The country is highlighting women’s economic empowerment so that poverty is not an accelerator of child marriage.

Actually, it’s not been too bad. But we are investing in local communities so that our organization doesn’t have to be there all the time. In Malawi, a woman chief, Theresa Kachindamoto, with whom we had established a really good working relationship, has since 2004 terminated a total of 2,549 child marriages in a breakthrough that has cost some subchiefs their positions.

The other focus area of our work is women’s empowerment. We formed the African Women Leaders Network, which is establishing leadership that has a constituency and a leadership that works for the needs of that constituency. We want to see grassroots women in Africa standing up together on issues they care about, such as ending child marriage.

The endgame is to have people who can stand on their own with or without the UN, so that we are just a support system. No single country in the world has attained gender equality or a robust democracy without the women’s movement, without civil society, without a certain degree of feminist thinking.

How bad is the situation of women in African conflict zones?

It is bad. In South Sudan, the level of violence against women is heartbreaking. Women in camps are violated by law enforcers and security personnel who are supposed to protect them, by the men living in the camps and sometimes by their own family. If they move outside the camps, they are at risk of abduction and rape. The perpetrators target women to punish their opponents. We have the same pattern in Central African Republic, where, because of religious or political conflicts or general lawlessness, women bear the brunt of the humiliation and pain that come with the war. In Sudan, things are not perfect. In Burundi, there are problems. But it should also be said that women in these places are fighting back. Women in South Sudan are standing up. Women in Burundi are playing a significant role in averting conflict by being community mediators. In Somalia, women are organising themselves to increase their participation in parliament.

A recent study shows that when women are actively involved in conflict resolution, peace is sustainable.

When you negotiate peace and women are empowered negotiators, the quality of the negotiated peace is better. Women sit at the table not to settle scores, but to seek genuine reconciliation. Women want reconstruction to be about clinics that heal, schools that teach, agriculture that feeds the village, etc. They want reparations that benefit the community. For peace to be sustainable, it must be inclusive. Women form at least 50% of the population in most countries, they bear the brunt of conflict and they need to have room to put forward their needs and priorities and have them adequately captured and represented when negotiating peace.

In Liberia, women played a major role in ushering in and sustaining peace, and they have never disbanded as peace activists. If you look at South Africa, a postconflict country, women played a significant role leading to the end of apartheid, to the negotiations, to the constitution—and ticked a lot of the critical boxes to sustain democracy. We saw that to some extent in Mozambique and in Namibia.

Yes, in Rwanda, and, although not a post-conflict country, Ghana too.

Apart from Rwanda, where women constitute 64% of parliamentarians, the gender parity goal in political representation is far from being achieved in Africa.

Compared with other regions of the world, Africa is doing better. South Africa is above the global average in the level of women’s political participation. There are more countries in Africa with a higher representation of women than you will find even in countries without conflict and that are much richer. But we should not be satisfied, because our best is not good enough.

Why the focus on women living in rural areas lately?

If there’s anyone left behind, it is women and girls in rural areas. We want to take those at the back of the line to the front of the line. We are putting their critical issues high on the agenda, looking at different solutions, exchanging and sharing best practices.

How does poverty in rural areas affect child marriages?

Because poverty is higher in the rural areas, girls in these areas face a higher risk of forced and early marriage. It is important for us to break with child marriage in the rural areas, where traditional authority and cultural practices are still strong.

Is there hope for young women in terms of economic empowerment and political participation?

We have a CSW [Commission on the Status of Women] for youth, which generates recommendations and insights that are taken to the main CSW. We are also ensuring that in the CSW we begin to get the young people to address and tackle the norms that hinder gender equality so that they are not steeped in the traditions of the generations before them.

The UN Secretary-General recently declared gender parity had been achieved in senior UN leadership. What can the African Union learn from that?

Decisiveness and leading from the front. The pace at which women have been recruited into the UN has a lot to do with the resolve of the secretary-general who has used his authority and power to make the appointments. He has had to assert himself, not take no for an answer.

Women earn 30% less than men in Africa. Is that an issue for you?

Yes. We are partnering with the ILO [International Labour Organisation] and civil society to promote equal pay. We want to see a breakthrough much sooner than 2030. It is one of the biggest but simplest campaigns: everyone understands the difference between a big pay cheque and a small pay cheque. Political leaders and heads of organisations must speak up and have policies that ensure women and men are paid equally.

What is your vision for the African woman?

The African woman is a pillar of the family and society. African women have leadership qualities. They care for their communities. I would like to see more women heads of state in Africa.