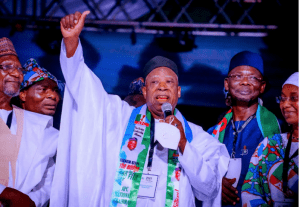 Senator Abdullahi Adamu, who was affirmed on Saturday as the All Progressives Congress (APC) national chairman, has been sworn in.

Adamu was inaugurated on Sunday at the Eagle Square, Abuja, venue of the party’s convention.

He emerged after an affirmative vote by the party’s delegates from the 36 states of the federation and the Federal Capital Territory (FCT) at the party’s national convention which began on Saturday in Abuja.