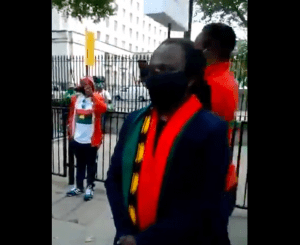 In a video shared online the Biafra protesters demanded an end to the killing of Igbo youths in Nigeria.

Recall that Nigeria’s President, Muhammadu Buhari, last week, said those trying to destroy the country would receive the shock of their life.

He also added on his Twitter handle that, “Those of us in the fields for 30 months, who went through the war, will treat them in the language they understand”.

Following public critism in the country and condemnations of the ban by Nigerians and the international community, Twitter deleted part of part Buhari’s tweets.

There have been a series of attacks on police stations and police personnel in the Southeastern states which the government and security forces have blamed on Indigenous People of (IPOB), and its militant arm, Eastern Security Network (ESN).

And many people have allegedly cried out that soldiers and other security agents are clandestinely killing youths in their numbers in that region.

This definitely has attracted Nigerians in the country and in the Diaspora to organise protests against the unfortunate incidents and other negativities of the Buhari-led government.

In the protest in London, protesters are seen with Biafra flags, polo shirts and wrist bands shouting ‘stop killing our children, stop the genocide.’