Beyond the “voodoo” economics 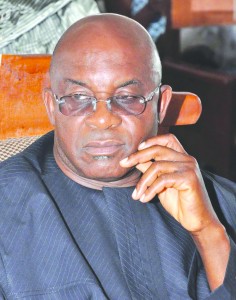 At the beginning of the debate, Senate President David Mark had admonished senators to “see the budget from a nationalistic periscope, using a national magnifying glass to view it instead of reducing it to partisan politics.” However, a careful observation of the debates showed that the legislators have expressed divergent views as to whether the Appropriation Bill should be passed or returned to the executive due to certain lapses.

Victor Ndoma-Egba, Senate Leader, in the lead debate had explained that the budget was premised on the 2014-2016 Medium Term Expenditure Framework and the Fiscal Strategy Paper, which took into consideration the heightened global economic uncertainty in 2013. He attributed the drop in the 2014 budget estimates to the challenges occasioned by oil theft, pipeline vandalism and oil production shut-ins which resulted in reduced oil revenue. He, however, described the budget proposal as a framework that will consolidate and add impetus to the transformation agenda of the Goodluck Jonathan administration.

Although the 2014 Appropriation bill has been christened “Budget for job creation and inclusive growth”, many senators believe that the budget proposal will neither guarantee job creation nor inclusive growth. Senator George Akume, leader of the opposition in the Senate, questioned  the allocation of  N268.3 billion  to the Subsidy Reinvestment and Empowerment Programme (SURE-P) which he described as an omnibus, being channelled to all sectors and wondered the real purpose of the money.

For Senator Ahmed Lawan, the budget is anti-masses.  He explained that it was packaged to further boost the economic power of top politicians, senior civil servants and high calibre industrialists as 76.3 per cent was allocated to recurrent expenditure while 23.7 per cent was voted  for capital projects.

“What we are saying is that only a small per cent is going to the masses of this country. How do you create jobs and alleviate poverty? The people should be at the centre of the concept, application, practicality and implementation of the budget. We cannot have peace so far we spend much of our funds on ourselves. We have to spend the bulk of our funds on the people so that everybody will have something to do and everybody would be safe,” Senator Lawan said.

Senator Smart Adeyemi lamented the high recurrent expenditure above capital vote and the continued depletion of the foreign reserves, accusing Okonjo-Iweala of imposing economic policies of the International Monetary Fund (IMF) and the World Bank on Nigeria.

“Okonjo-Iweala should be told in clear terms that the economic policies of the IMF and the World Bank cannot work in Nigeria. The policy must be reviewed. The IMF and the World Bank policies cannot work 100 per cent in Nigeria. We don’t need IMF commendations. What we need is what will impact on the lives of Nigerians. We need to concentrate on key areas such as power and other sectors as well as work on budget management,” Adeyemi said.

For Senator Gbenga Ashafa, the 76.3 per cent recurrent expenditure and the 23.7 per cent capital components of the budget are rather lopsided, and therefore far from meeting the needs and aspirations of the people. He said since money was not enough in the capital sector, it was impossible for the economy to witness sufficient growth that could engender employment creation.

In the House of Representatives, many legislators faulted the efforts of Dr Okonjo-Iweala to present the state of the economy in bright light. According to the parliament, the economy cannot be bright when government has earmarked N572 billion to service N7.1 trillion domestic debt in the 2014 Budget.

Femi Gbajabiamila, the Minority Leader while contributing to the debate, described the 2014 budget as having the trappings of “voodoo economics” and “make-believe.”  He said: “It is voodoo economics when you say a 23.7 per cent capital budget will create jobs and provide inclusive growth. It is voodoo economics when you allocate N700 billion – 15 per cent of your annual budget – to debt service. How do you allocate N700 billion for debt and N1.1 trillion for capital projects, claiming to be a job-creating and inclusive-growth budget?”

Gbajabiamila submitted the 2014 budget proposal “cannot be sent back the way it is; we have a sacred duty and obligation to Nigeria and Nigerians to give them a budget worthy of our country.” According to him, anything less would amount to negligence, malfeasance and a dereliction of the legislature’s duty and responsibility to the country.

As part of the  agenda-setting role of the  media, TheEconomy magazine  presents an in-depth analysis of the proposed 2014 federal budget by Mike Obadan, a  Professor of Economics at the University of Benin, Benin City, Chairman, Foundation for Education and Development, Benin City and former Director-General of the Nigerian Centre for Economic Management and Administration, Ibadan. He has also served as President of the Nigerian Economic Society and contributed significantly to societal development through consultancy services to various national and international organizations.

A Fellow of the Nigerian Economic Society and the Institute of Management Consultants of Nigeria, Prof. Obadan has published extensively in the areas of macroeconomics, international trade, finance and development issues. He was also the Chairman of the Economic Policy Analysis Network of the Harare-based African Capacity Building Foundation’s Technical Advisory Panels and Networks (TAP-NETs).

Essentially, Prof. Obadan’s  article is an analysis of the 2014 budget from  an expert’s point of view.