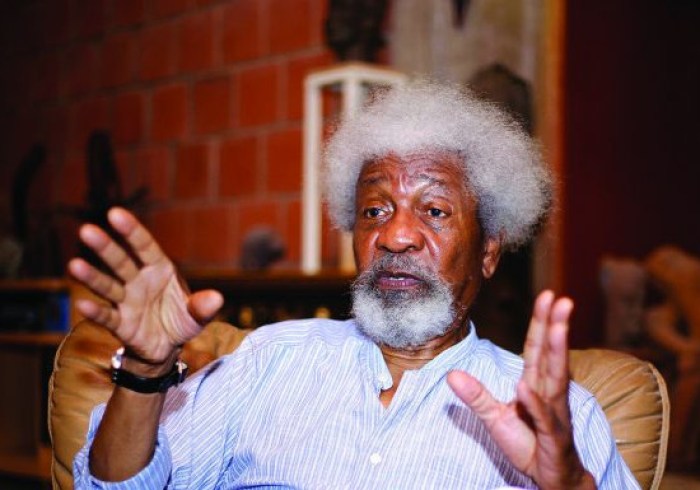 Responding to the war of words provoked by ex-President Obasanjo’s comments against increasing divisions in the country and virulent replies from the presidency, the Nobel Laureate, Wole Soyinka, boldly came into the fray yesterday. Soyinka’s unexpected response portrays a cloud of unspoken bitterness clogging the minds of many people in Nigeria.

“I am notoriously no fan of Olusegun Obasanjo, General, twice former president and co- architect with other  past  leaders of a crumbling edifice that is still generously called Nigeria. Nonetheless, I embrace the responsibility of calling attention to any accurate reading of this nation from whatever source, as a contraption teetering on the very edge of total collapse”, Soyinka said.

He said he was in support of Obasanjo’s letters and comments concerning the ugly state of the nation. Qualifying  Nigeria’s fate as ‘close to extinction as a viable comity of peoples’, he said the nation was ‘deeply divided as never before’ and that Buhari was  to blame squarely.

He gave instances of how deep Nigeria has divided, in the Benue massacre a few years ago, in which hundreds of people were slaughtered by another people and were buried in mass graves, yet the president did nothing.

Making an argument from the incessant fights between  herdsmen and farmers, he  asked rhetorically, “How do you persuade graduates and young school leavers to try their hands at farming, instead of flooding urban centres looking for nonexisting white-collar jobs? To get killed and be dismembered?” He believes such ethnic and religious divisions have taken place under the policies, regulations and conducts of President Buhari and the governors who are equally culpable. The Nobel Laureate also drew attention to the Ministry of Petroleum Resources as a nepotistic cesspit, under the watch of Buhari as the minister in charge.

Lamenting again over the fate of Obadiah Mailafia, former Deputy Governor of the Central Bank of Nigeria, the literary giant wondered how reasonable it was to resort to haunting a man who has made useful revelations about the alleged enemies of the state. And instead of  inviting and questioning ‘the indicted fanatics of unlimited impunity,’ the agencies of government are busy harassing and threatening him.

Indeed, Soyinka’s outburst represents  the high point of the pent up anger welling up in a rather docile civil society, against the excesses and pains  from Muhammadu Buhari’s administration. Nobody is saying that Buhari is responsible for all the woes of Nigeria. But each time issues are raised, government always prefers to haul invectives and abuses rather than address the cogent issues at stake. This  suggests, rightly or wrongly that Buhari’s administration does not take it kindly with opposing views and freedom of expression. Then where is the democracy?