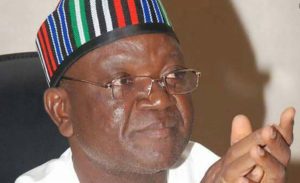 Benue State Governor, Samuel Ortom has told the leadership of the Miyetti Allah Cattle Breeders Association of Nigeria (MACBAN) that their call for the repeal of the state anti-open grazing law is nothing but a call in vain.

Ortom stated this in a statement issued by his media aide, Terver Akase while reacting to the outburst of the National Secretary of MACBAN, Baba Usman Ngelzarma on a Television programme.

Ngelzarma had in the program described as a failure, the Open Grazing Prohibition and Ranches Establishment Law of Benue State.

But Akase described Ngelzarma’s comments as not a surprise, describing him as one of those whose willful ignorance and misinterpretation of the law have fueled bitter emotions and hatred among pastoralists to embark on a killing spree of farmers in Benue State and other parts of the country.

He said that the MACBAN National Secretary was not new to contradictory statements.

Parts of the statement read, “It is on record that he and other officials of the group visited Benue State in 2017 and after a meeting with Governor Samuel Ortom, addressed the media where they pledged support for the state’s Open Grazing Prohibition and Ranches Establishment Law.

“On that occasion, Ngelzarma who spoke on behalf of the delegation admitted that with their deeper knowledge of the law during their visit to Benue, it was now obvious to MACBAN that the legislation was indeed not targeted at Fulani or any other group. Their only appeal was for an extension of the November 2017 deadline given for the commencement of implementation and enforcement of the law.

“That the Miyetti Allah mouthpiece now goes to national television to kick against the same law they once described as ‘a win-win for all’ only proves that he is a merchant of crisis and one of those bent on truncating the peacebuilding process in Benue and other states of the federation.

“Miyetti Allah’s anger towards Governor Samuel Ortom is well understood. We expected the MACBAN National Secretary and his group to feel frustrated after the Governor refused to accept their offer to betray his people and repeal the law in order to attract personal favours from their sponsors.

“We must make it clear to Miyetti Allah groups and others who want Benue to repeal the Open Grazing Prohibition and Ranches Establishment Law to stop daydreaming. The law has come to stay, and no amount of sponsored propaganda can compel the State Government to repeal it.

Akase said that the anti-open grazing law has recorded tremendous success since it was enacted, saying that many people who own livestock in the state have ranched their animals, while over 400 lawbreakers have been arrested with some already tried by competent courts and convicted.