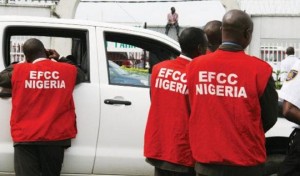 Brig. General Jafaru Isa, a chieftain of the All Progressive Congress (APC) was arrested and quizzed by the Economic and Financial Crimes Commission (EFCC) over his allegedly collection of about N100 million from the Office of the former National Security Adviser, Sambo Dasuki.

Although, EFCC spokesman, Wilson Uwujaren, did not give reason why Jafaru Isa was arrested on Wednesday night in Abuja, insiders claimed the crackdown follows his failure to report to the office of the anti-graft agency to explain his involvement in the arms fund scandal.

The former military administrator of Kaduna State and a known associate of President Muhammadu Buhari, according to the agency sources, is being questioned by EFCC to ascertain whether he was involved in Sambo’s arms procurement scam or not.

Isa, it would be recalled, contested as the governorship candidate of the defunct Congress for Progressive Change(CPC), a party forrmed by President Muhammadu Buhari, in Kano State in 2011. He was also one of the 19 members of the Buhari Transition Committee led by Ahmed Joda.

Another EFCC source revealed that Dasuki also gave about N135million to Jafaru Isa in 2013 to buy a house for him in Kano.

“You know Jafaru Isa and Dasuki have been together since their days at the Nigerian Defence Academy (NDA), Kaduna. So, when Dasuki wanted to buy a house in Kano, he approached Isa.

“It was while they were investigating the Arms scam that they saw the transaction. But frankly speaking, it has no connection with it. It happened between 2013 and 2014,” he said.

Meanwhile, it was gathered that the EFCC is making moves to get a court injunction to keep the spokesman of the People’s Democratic Party (PDP), Olisah Metuh in custody to allow for further investigation.