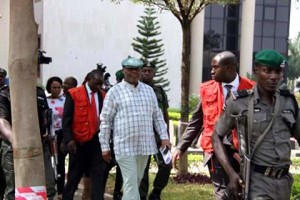 A Federal High Court in Abuja on Wednesday ordered the remand of Raymond Dokpesi, founder of DAAR Communications, in the custody of the Economic and Financial Crimes Commission (EFCC) pending the determination of his bail application.
Justice Gabriel Kolawole, the presiding judge, gave the order after  Dokpesi was arraigned by the EFCC on charges of N2.1 billion contract fraud and money laundering.

Dokpesi, who was arrested on December 1, by the anti-graft agency alongside Attahiru Bafarawa, former governor of Sokoto State, on the allegation of complicity in the fraud accusation leveled against Sambo Dasuki, former National Security Adviser, pleaded not guilty to the charges.

The PDP stalwart was slammed a  six-count-charge of contract fraud and money laundering amounting to N2.1 billion, along with his company, Daar Holding and Investment Limited.

In the charges read in the court, the defendants were alleged to have fraudulently obtained N2.1 billion through a purported media contract for the purpose of 2015 presidential campaign. The defendants were alleged to have received the money through a First Bank account operated by the office of the former national security adviser. After taking his plea, Mike Ozekhome, Dokpesi’s lawyer, told the court that he had filed an application seeking to admit his client to bail. 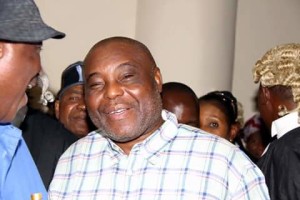 “My lord, we got the charge yesterday, we filed bail application this morning and we are ready to argue our bail application”, he said. However, Rotimi Jacobs, prosecution counsel, told the court that he was yet to file a reply to the bail application and would need a short adjournment to do so.