Uproar has trailed the N100 million set by the All Progressives Congress (APC) for aspirants seeking to run for president as the cost of the party’s presidential form is far higher than the four-year salaries of President Muhammadu Buhari and Vice President Yemi Osinbajo.

With the current salary of the President, which is put at N14.058 million yearly or N1.171 million monthly, according to a breakdown by the Revenue Mobilisation, Allocation and Fiscal Commission, it means that the N100 million APC nomination form is the salary of the President for about 85 months or seven years. 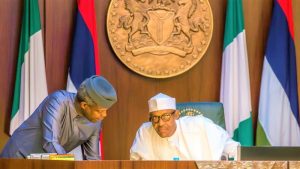 For the Vice President who currently earns N12.126 million yearly or N1.01 million monthly, the N100 million nomination form is his salary for 99 months or eight years and three months.

According to the schedule of fees for expression of interest and nomination forms released by the APC National Working Committee (NWC), presidential is N100 million, governorship is N50 million, Senate N20 million, House of Representatives N10 million, while state House of Assembly aspirants would purchase theirs at N2 million.

The N100 million for Presidential nomination form is over 100 per cent increase from the amount it sold the form for the same office in 2018 at N45 million; and nearly 200 per cent hike from N27 million it sold forms in 2014. The N100 million fee is also more than double the fee of the major opposition Peoples Democratic Party (PDP), which fixed its Presidential nomination form at N40 million.

Reacting to the cost of the nomination form, rights group, the Human Rights Writers Association of Nigeria (HURIWA), urged the Economic and Financial Crimes Commission (EFCC) and the Independent Corrupt and Other Related Offences Commission (ICPC) to probe the source of wealth of any presidential aspirant who picks the APC presidential nomination and expression of interest forms.

The group made this known in a statement yesterday by its National Coordinator, Emmanuel Onwubiko. The group said only corrupt politicians would afford that much for a nomination form.

HURIWA said: “Anyone who buys the nomination form at such a scandalous amount should be arrested and handed over to law enforcement agencies such as EFCC or ICPC or the Nigeria Police Force for investigation on the source of the money.

“We only just finished carpeting the opposition PDP for bastardising the process of nominating its presidential candidate by inflating the cost of its nomination form to N40 million, little did we know that the politicians who run the Federal Government and have ruined the national economy will peg theirs at the extravagant cost of N100 million.

“This same APC government is unable to meet the funding obligations for federal universities and thereby has left millions of students of public schools to roam around in their homes due to industrial strike by university teachers for over two months.

“It is a shame that those who seek to govern Nigeria are made to cough out so much money to purchase forms just to signpost their original intention as persons whose only objective would be to first recoup their huge investments and to further impoverish the citizenry.”

Also describing the cost of APC form as shameful, another rights group, the Civil Society Legislative Advocacy Centre (CISLAC), has called on all Nigerians to condemn money politics.

In a statement by Executive Director, CISLAC/Chairman, Transition Monitoring Group (TMG), Auwal Ibrahim Musa (Rafsanjani), the body said: “It is shameful that the ruling party, that the President belongs to, has endorsed the expression of interest and nomination forms for its presidential ticket at N100 million. This is especially at a time when many have expressed dissatisfaction with the level of youth participation in partisan politics and called for deliberate measures to create the enabling environment for wider inclusion and active participation of women and youths in politics and governance of the country.

“A key question to ask is, ‘who can legally afford N100 million for a Presidential ambition?’ This despicable decision by the APC begs this question as it only serves within the following contexts to marginalise youths, women and average citizens.

“Despite claims of a 50 per cent reduction in nomination fees for women and youths, it clearly shows that N50 million remains higher than the 2019 Presidential aspirant fee, which was N45 million. This will apparently exclude the youths, women and average Nigerians who have clamoured to improve opportunities to exercise their rights to declare their interests and contest in the elections.

“Today’s decision by the ruling party makes a mockery of the efforts of all the stakeholders and general public that campaigned vigorously to secure the signing of the Not Too Young To Run bill into law by President Buhari on May 31, 2018. It once again re-emphasises the lack of sincerity of purpose and political inconsistencies that have plagued this administration’s decisions/commitments to any cause or agenda.

“Needless to say, the Not Too Young To Run law has been reduced to only a facade that masks the true drivers of retrogressive politics in Nigeria, which include money politics, godfatherism and the lopsided economic disparity between the mighty old ruling class and the seemingly apathetic youths, deliberately pauperised by the same criminal political elite.”

But a chieftain of the APC, Chief Chekwas Okorie, has stated that the party’s high presidential nomination fee would make the primary election less chaotic, stressing that it would also determine the seriousness of the aspirants. Okorie also insisted that it would create opportunity for growth and expansion in democracy, as other fringe political parties were likely to benefit from it.

He stated that politicians have continued to behave as if there were only two political parties in Nigeria; the APC and PDP, thereby denying the growth of smaller political parties, stressing that with the development, politicians desirous to serve could still find veritable platforms in other smaller parties.

“So to make it less chaotic, they begin to determine the seriousness from that angle. There could be other hurdles to prune down the number to a manageable proportion. The level of expression being shown by members in the presidency is unimaginable. The aspiration from the Southeast alone is in legion. So, it is not a bad thing to use the fees to determine those that are serious.”

Reminded that the stand of the party could encourage moneybags taking over the political space, Okorie said that it would not, stressing that, “spending N100 million to buy presidential form does not translate to winning the election.”