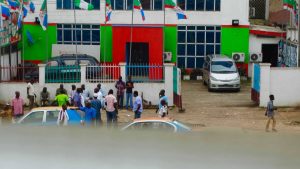 In what appears to be a manifestation of a one man squad, a chairmanship aspirant for the All Progressives Congress (APC) convention today, Saliu Mustapha, hinted that he would challenge the consensus arrangement at the Eagle Square today. In a statement, Director General, Saliu Mustapha Campaign Organisation, Malam Bala Usman, said Mustapha would not submit himself to any imposition.

“Indeed, we recognise consensus as one of APC’s acceptable leadership selection methods, which is completely legal and constitutional. However, we are convinced that for consensus to abide, it must be all-inclusive and devoid of any vestige of imposition,” Usman said.

He said his principal was in touch with other aspirants smarting to demand for the conduct of an election rather than mere ratification of a list of favoured candidates.

He said: “This is why Malam Saliu Mustapha, together with all the other aspirants, would continue to engage in order to review the options before them and agree on a common and mutually beneficial decision. Until this is done, nothing has been decided yet.

“In the course of his campaigns for the office of the National Chairman of the APC, our candidate, our team as ably led by the Turaki of Ilorin has had close interactions with party members, supporters and well-wishers, who all share in his fervent desire to build the APC into a party that prioritises inclusion, fair reward system and a transparent internal democracy, all of which are the major pillars of his campaigns.

“His aspiration to lead the party is on behalf of these categories of party members and stakeholders. He will therefore not take any decision without considering the deep hope and expectations that have been invested in him by these multitudes of members that spread all over the country.

“While he will join other aspirants in the race to work out a most acceptable outcome in the larger interest of the party, we request that all his supporters and well-wishers remain calm. As it is the tradition in the Saliu Mustapha Campaign Organisation, the decision of what to do will be that of everyone involved, not just that of Turaki alone.”