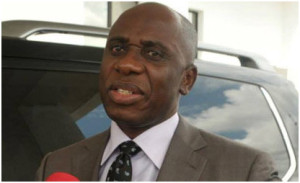 The Minister of Transportation, Mr Rotimi Amaechi, has directed immediate financial and staff audit of the Nigerian Maritime and Administration and Safety Agency (NIMASA).

The minister gave the directive during his maiden tour of Lagos ports and a stop-over at NIMASA Resource Centre, Kirikiri.

Amaechi also directed the Acting Director-General of NIMASA, Mr Haruna Jauro, to forward details of contracts awarded by the agency for verification.

The former Rivers governor demanded a detailed financial report of the agency since its inception.

The minister also requested for the staff nominal roll and details of staff employed by the agency and their qualifications.

He instructed the acting director-general to forward the staff nominal roll of the agency to the Federal Ministry of Transport to know if there were vacancies to be filled.

Amaechi expressed dissatisfaction with the ill-equipped clinic laboratory at the NIMASA Resource Centre.

“From my inspection so far, I discovered that the Search and Rescue clinic is not equipped; the canteen is in deteriorated condition; the chairs are not okay and the place is leaking,” he said.

NIMASA, the apex regulatory body, was created from the merger of National Maritime Authority (NMA) and Joint Maritime Labour Industrial Council on August 1, 2006.

Earlier, Amaechi directed the management of Nigerian Ports Authority (NPA) to work toward achieving 48 hours cargo clearance target when he visited the headquarters of the agency in Lagos.

He said he had promised President Muhammadu Buhari that he would ensure Nigerian ports achieved 48 hours cargo clearance target.