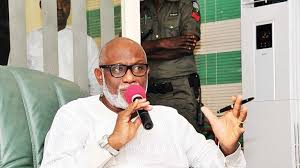 It is interesting to note that Akeredolu’s political structure of friends and party loyalists has continued to diminish by the day. This is particularly frightening as the Ondo governorship election is almost around the corner.

This time, another top government official working with the governor, together with others, has resigned his appointment to join the Zenith Labour Party (ZLP), ahead of the October 20, Ondo governorship election.

Bisi Ilawole, a Commissioner with the Ondo State Oil Producing Commission (OSOPADEC), resigned his appointment with the state government on Tuesday.

In his resignation letter addressed to Mr Akeredolu, he appreciated the governor for giving him the opportunity to serve the state in the capacity of a Commissioner in the intervention agency.

“Sir, it is my profound gratitude for the rare privilege given to me under your administration to serve as a commissioner representing the good people of Ilaje Oil Producing Communities,” part of his letter reads.

After his resignation, he also defected from the All Progressives Congress (APC) and joined the ZLP, with his supporters.

In another development, a former Chairman of Ileoluji/Okeigbo and a lawmaker representing the constituency, Folagbade Gbemibade, have equally dumped the Peoples Democratic Party (PDP) for ZLP.

Speaking after he received them at the ZLP Secretariat, the state chairman, Joseph Akinlaja, said the interest of the folks would be considered. It is pertinent to note that the Zenith Labour Party’s Flag bearer for the Ondo governorship election, is no other than Agboola Ajayi, Rotimi Akeredolu’s deputy.