The apex regulatory body in the nation’s advertising industry, the Advertising Practitioners Council of Nigeria (APCON) has said it would sanction one of the nation’s financial institutions, Sterling Bank Plc, for exposing an ‘insensitive and provocative’ Easter advert.

The Registrar of the Council, Dr Lekan Fadolapo, in a statement issued on Monday, stated that the financial institution would be queried for comparing the resurrection of Jesus Christ with Agege Bread, popular bread in Lagos. 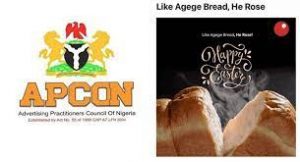 Describing the advertisement as ‘distasteful’, the APCON boss stated the bank would also be sanctioned for its failure to submit the ad material to the Advertising Standards Panel (ASP) for approval, before exposure.

The Advertising Standards Panel (ASP) is the statutory panel charged with the responsibility of ensuring that advertisements comply with the prevailing laws as well as ethics of Advertising in Nigeria, before approval.

“The distasteful advertisement was neither submitted nor approved for exposure by the Advertising Standards Panel (ASP), the statutory panel charged with the responsibility of ensuring that advertisements conform with the prevailing laws of the federation as well as the code of ethics of Advertising in Nigeria.

“APCON will take necessary actions to ensure that Sterling Bank is sanctioned for the exposure of such offensive advertisement according to law and that no religious belief or faith is ridiculed or any blasphemous advertisement exposed in any guise,” Fadolapo stated.