NAFDAC Says Use of Chemicals, Drugs in Food Items Responsible for Kidney Failures 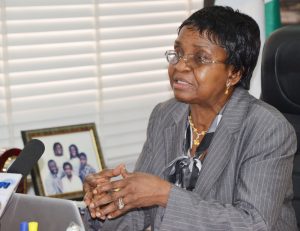 The Director-General, National Agency for Food and Drug Administration and Control, NAFDAC, Professor Mojisola Adeyeye has attributed the increasing rate of kidney diseases and cancer in the country to irresponsible use of drugs and chemicals among residents.

Speaking at the Flagg-Off of the agency’s sensitisation campaign in Osogbo, Osun State on Tuesday, she stressed the need for Nigerians to stop buying drugs from street hawkers but from licensed pharmacies and medicine stores, saying the standard of hawked drugs has been altered and dangerous to health.

Represented by the Director, Food Safety and Applied Nutrition in the Agency, Mr Sheriff Olagunju, She urged food vendors and market women to desist from using dangerous chemicals as preservatives or catalyst to ripen fruits, saying it constitutes risk to major human organs.

“The dangerous practice of using petrol or kerosine tanker trucks to transport vegetable oil is very dangerous to consumers. When such contaminated vegetable oil is consumed, it damages the kidney, liver and several other organs within our system that we do not even know. That is why in recent times, we have a lot of cancer and kidney ailments in Nigeria.

“Many other practices such as using potassium bromate in bread production, formalin to preserve meat, use of dyes to enhance the redness of palm oil and the use of sniper to preserve beans from insects constitute risk for consumers of such food items.

“We plead with market women and food producers to desist from such acts in the general interest of the people and the country as a whole”, she said.

In his goodwill message, Osun State Governor, Mr Adegboyega Oyetola, who was represented by his Special Adviser on Public Health, Dr Siji Olamiju, said the sensitisation exercise was at the right time with the ravaging effect of coronavirus pandemic, stressing the need to concentrate more on the rural areas to achieve meaningful result.

“Winning the awareness and sensitization campaign will require taking it to the doorsteps of the citizenry most of whom live in the villages.

“I would therefore like to appeal to NAFDAC to decentralize this awareness and sensitization programme by taking the message to the nooks and crannies of the State so that our mutual plan of delivering healthcare to the people would be realized”, he said.