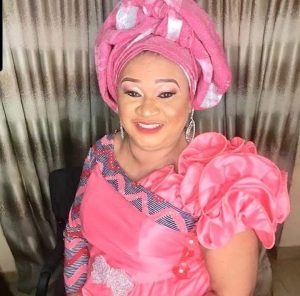 Reports reaching The Economy Online says that veteran actress Racheal Oniga is dead. She is said to have died early this morning. The news was broken by fellow actress Foluke Daramola.

The cause of death is yet to be ascertained at the point of writing this report but there are indications that she was not sick as she has been actively engaged in shooting of films early this week in Mowe area of Ogun State.

Oniga’s demise was also confirmed by her another Nollywood actress, Bimbo Oshin via Instagram. “Heaven has just gained yet another beautiful soul Aunty Rachel! Haa! I am speechless. Rest in peace Aunty This life sha!” she captioned a picture of Oniga.

Oniga, who hails from Eku, Delta State, began her acting career in 1993. She was a star actress in pouplar movie, ‘Chief Daddy’. Some of her popular works include; Out of Bounds, Owo Blow, The Wedding Party, 30 Days in Atlanta and Power of Sin.