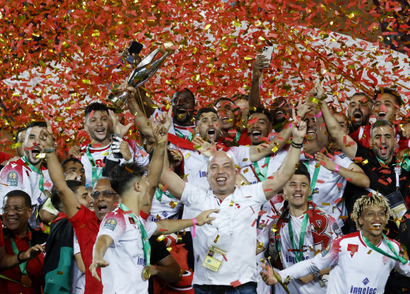 African soccer is getting a new annual club competition that may generate money for participants at a scale never seen before in the continent. At least that’s the hope for the Africa Super League.

The tournament will boost the “quality and competitiveness of football in Africa,” in part with the $100 million prize money attached, according to Patrice Motsepe, president of the Confederation of African Football (CAF).

CAF, at its latest meeting in Tanzania on Aug. 10, launched the potentially transformative Africa Super League. Its winner will receive $11 million, more than double what Senegal’s national team got for winning the Africa Cup of Nations in February this year.

The new League has FIFA’s blessing — president Gianni Infantino was present by Motsepe’s side during the launch.

Attempts to form a European Super League failed last year following a fan backlash against the alleged greed of the six clubs involved. CAF’s move, on the other hand, appears to target a historic African soccer problem.

The continent’s most renowned soccer stars, from the current Liberian president George Weah to Cameroon’s Samuel Eto’o, spent the golden years of their careers in European leagues. Others followed suit, with the likes of Egypt’s Mohammed Salah being among the top goal scorers in the 2021-22 season.

Now, some change is finally happening with the rise of more professional privately-owned clubs. But even these will need big platforms for their investments to make business sense.

Until now, Africa has had two annual club soccer competitions: the CAF Champions League and the CAF Confederations Cup. The Champions League affords one African team to play in the annual FIFA Club World Cup. Besides that, however, these tournaments offer little else, either to soccer-crazy Africans or participating clubs.

The Africa Super League winner, for a change, will get almost as much as the CAF Champions League’s entire $12.5 million prize pot. The 24 participating clubs (not more than three per country) will get $2.5 million each, too.

The new league, starting in August 2023, also promises new income for Africa’s national soccer associations to develop the sport: $1 million a year from CAF to each of its 54 member countries.

FIFA president Infantino has had an African Super League agenda since 2019 when he touted a potential $1 billion investment in stadiums for a league that will generate $200 million in revenues every year.

However, even with a take-off imminent, it is unclear how the League will make money and how inclusive it will be of a majority of African soccer clubs. For a start, it has attracted criticism as a flawed money grab. The South African players’ union has already dubbed it “unworkable, ill-conceived.” Then there is the difficulty of intra-Africa travel.

Motsepe is optimistic, though. South Africa’s first black billionaire, he owns Mamelodi Sundowns, one of his country’s biggest soccer clubs and has been a Infantino ally since becoming CAF president last year. A successful start for the Africa Super League could energize soccer in the continent away from his predecessors’ scandal-ridden past.