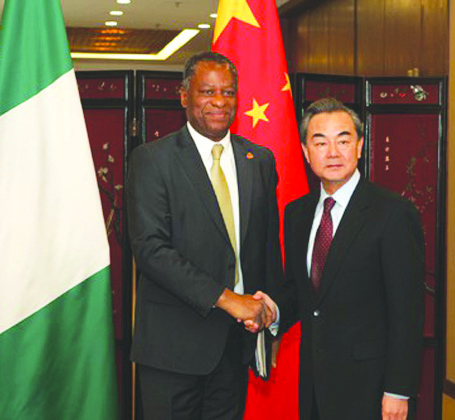 The Chinese government is intensifying efforts in its relations with Nigeria. As part of measures to further strengthen the diplomatic ties between the two countries, China is investing additional $40 billion in Nigeria.

The Chinese Foreign Affairs Minister, Mr Wang Yi announced the investment plan recently at a bilateral meeting with his Nigerian counterpart, Mr Geoffrey Onyeama in Abuja. He said China had invested about $45 billion in various projects in Nigeria and was at the verge of releasing another $40billion. “China has already invested or financed a total number of $22billion projects here in Nigeria, another $23billion projects are on-going. In addition, we are also following up another over $40billion of investments, which are in the pipeline,” Yi said.

The Chinese foreign minister had during his visit to Nigeria met with President Muhammadu Buhari at the Presidential Villa, where the president pledged that Nigeria would honour all agreements signed with the People’s Republic of China. ‘‘This administration is very serious about infrastructural development. We want rail, road, power, skill acquisition for our people. We ought to have developed beyond this point, but we neglected infrastructure when we had the resources. Now, we have to collaborate with you, and we will keep our side of the bargain in all the agreements we have signed,” Buhari said in a statement by his Special Adviser on Media and Publicity, Mr Femi Adesina.

The president had visited China in April, last year, as guest of President Xi Jinping, and the two countries signed memoranda of understanding on projects, running into billions of dollars.

At the press briefing with his Nigerian counterpart, the Chinese foreign minister said the purpose of his visit to Nigeria was to implement the important agreement and cooperation reached between the Chinese and the Nigerian presidents and at the same time work closely with Nigeria to ensure that the outcome of the FOCAC summit is well implemented here in Nigeria. “In order to achieve further development and prosperity of the two countries, we need to strengthen our political mutual trust, deepen complementarily between our developments, further expand practical cooperation and deepen our strategic partnership,” he said.

He described Nigeria and China as strategic partners whose relations, he noted, had developed well. He, however, said when compared with the size, population and markets of the two countries, their cooperation had large potential to be deepened.

Yi said he was confident his visit would further strengthen the strategic partnership between China and Nigeria.

Onyeama commended the Chinese government for its solidarity with Nigeria and Africa, stressing that the relationship between Nigeria and China has been going on for many years.

While commending the Chinese government officials for their yearly visit to African countries with a view to discussing substantive issues of development, he said that the visits were unique because they show solidarity of China with Africa. “You know of course that the Peoples Republic of China has been meeting regularly with Africa and the forum for discussing technical cooperation with African countries, the acronym is FOCAC. The last one took place in South Africa last December and the government of China made available a total of $60 billion for Africa and a number of countries, including Nigeria are in discussions to see how much of that could be used to assist in the various projects that we have in this country,” Onyeama said.

He also identified transportation as one area the Chinese government has been helpful to Nigeria.

The minister noted that apart from the FOCAC issue, China has, so far, invested between $60 billion and $80 billion in Nigeria, adding that President Muhammadu Buhari’s visit to China last year further opened up more areas of cooperation. “In area of infrastructure, which is one of the priority areas in the diversification programme of this government from oil to agriculture and infrastructure, the Chinese government has been showing a lot of cooperation with us,” he said.