2023: Wike Vows To Tackle Insecurity And Hunger If Elected President

Rivers State Governor and Presidential Aspirant under the umbrella of the Peoples Democratic Party (PDP), Nyesom Wike on Monday assured that he will address the problem of insecurity and fight hunger through job creation if elected the next President of Nigeria come 2023 presidential election.

Wike said he is offering himself as the right solution that will stall the killings of innocent Nigerians by terrorists, bandits and other criminals across the country. 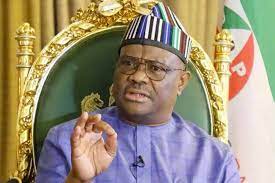 This was disclosed in Maiduguri the Borno State capital during a meeting with PDP stakeholders where Governor Wike appealed to delegates to give him their support so as to emerge the party’s presidential flag bearer ahead of next Month’s presidential primaries.

According to the Governor, there is an urgent need to rescue the country from total collapse and urged the PDP delegates to give the party’s ticket with a view to ensuring the defeat of the ruling All Progressives Congress (APC) at the polls next year February.

“I appeal to you to vote for me to emerge as PDP Presidential Candidate and you will not regret it. You need a PDP committed person to fly the flag of the PDP and bring back the economic fortunes of Nigeria.

“You need somebody who has the courage to fight insecurity in Nigeria and I want to tell you that I’m the right person with such courage,” he said, noting that “Nigerians are tired of the many excuses and failures of the ruling APC.”

Governor Wike maintained that he is confident of obtaining the PDP Presidential ticket and also winning the presidential election based on the massive support he has been receiving from across the country, pledging that his administration will bring succor to Nigerians.

He said the ruling APC has so far failed the nation, especially in the area of security of lives and properties, stating that insecurity has “spread to all parts of the country and Nigerians are no longer safe.

“One of the major problems in this country is the Insecurity of lives and properties, there are terrorists everywhere and Nigerians are not safe. The APC has not done well in providing security to Nigerians.

“Our people can no longer access their farmlands due to insecurity and there is hunger across the country. If elected President, I will tackle insecurity and eliminate hunger,” Governor Wike said.