2023 Presidency: Amaechi Is My Project – Ndume

Chairman Senate Committee on Army, Ali Ndume, has declared his support for the presidential bid of the Minister of Transportation, Rotimi Amaechi.

“Yes, that is my project”, he asserted during an interview, when asked if he supports Amaechi. Explaining further, he said: “I started it, I am one of those who had asked Amaechi to run”. 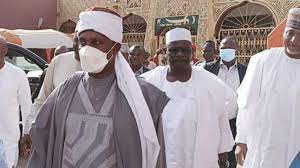 Ndume believes the transport minister will be a great candidate for the top job as he described him as someone who “has the pedigree, energy and intellect” needed to run Nigeria.

Amaechi had announced his interest to contest the presidential election in 2023 on April 9. He made the announcement while addressing a crowd of supporters and leaders of the All Progressives Congress (APC) at an event in Port Harcourt.

The minister was giving a speech titled, ‘Forward With Courage’ at a thanksgiving service held at the Adokiye Amiesimaka Stadium in the Rivers State capital.

“Fellow Nigerians, I stand before you today to declare my intention and submit my application to serve as your next president,” he announced to the cheers of hundreds of party faithful at the event.

“I did not come to this decision lightly, I have served our nation for the last seven years as minister of transportation.