2017 Budget and the Challenge of Implementation 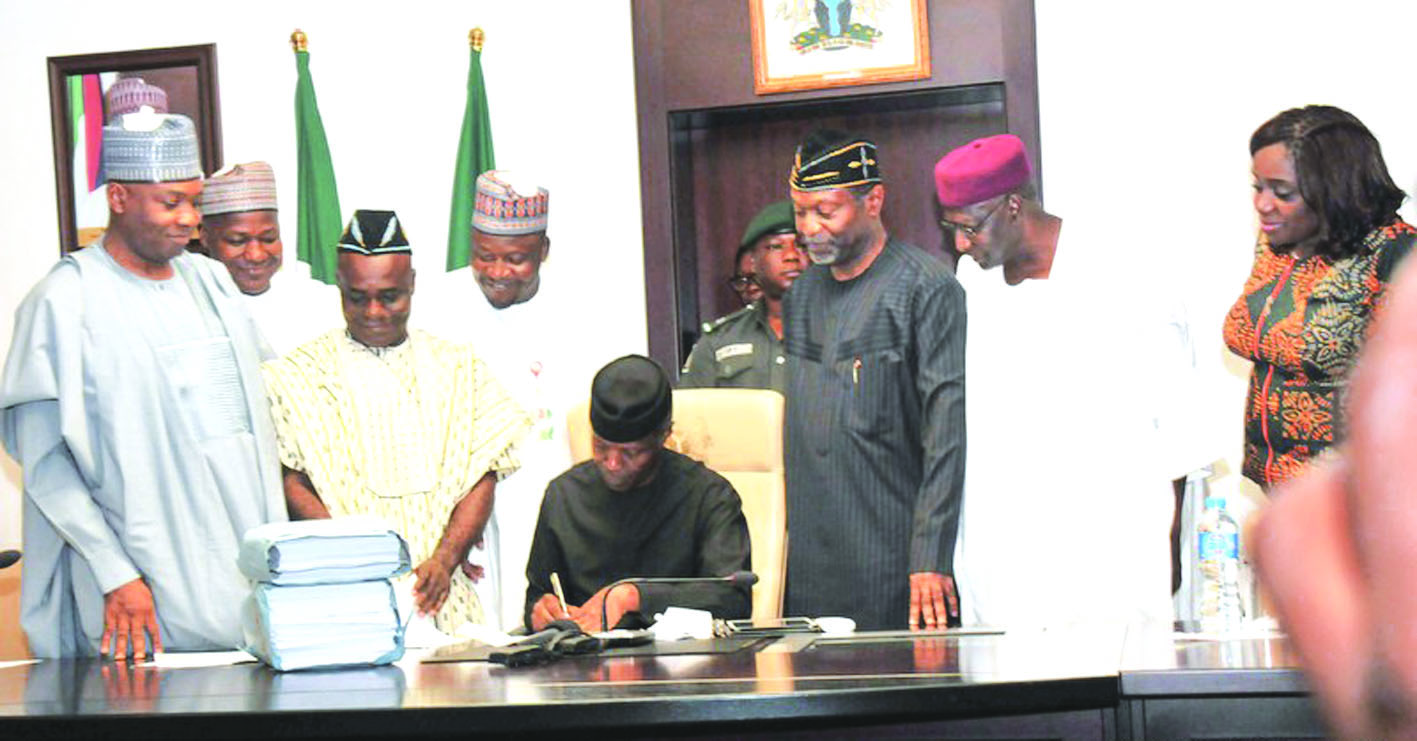 With the signing of the 2017 budget by Acting President Yemi Osinbajo, financial experts call for effective implementation to enable it deliver positive economic growth and prosperity, writes Dike Onwuamaeze 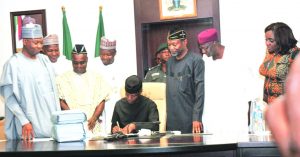 Now that the 2017 Appropriation Bill has finally been signed into law, the question on every Nigerian lips is whether the budget would be effectively implemented to deliver positive economic growth and prosperity, given its tardiness.

What is more, the budget is expected to pull the economy out of recession and set it on the path of sustainable and inclusive growth by stabilizing the macroeconomic environment; boosting agriculture and ensuring food security; energy sufficiency in power and petroleum products; improved transportation infrastructure; and industrialization through support for micro, small and medium-scale enterprises (MSMEs).

However, many financial analysts are worried that the delay in the final presentation and signing of the budget could pose some challenges. Richard Obire, former Executive Director, Keystone Bank, believes that “by delaying the signing of the budget, many projects that would have been initiated and scheduled for completion within the period may not be completed within the fiscal year”.

According to him, the N143 billion injected into the budget by the National Assembly is on the expenditure side and would require more borrowing.
Okechukwu Unegbu, former Managing Director of Citizen Bank and one time president of the Chartered Institute of Bankers of Nigeria opined that the implementation of the budget might suffer because the Executive would not implement the additional projects ‘imported’ into the budget by the Legislature. Nevertheless, he said, the signing of the budget is good news for the economy.

Muda Yusuf, Director-General of the Lagos Chamber of Commerce and Industry, says with the signing of the budget, Nigerians have heaved a sigh of relief as it is now ready for implementation and this has put an end to the long period of uncertainty caused by the delay. For him, what is left now is speedy implementation to enable Nigerians derive the desired value from the budget.

“There is an urgent need to define the limits of authorities of the Executive and the Legislature on the Appropriation Bill. A judicial pronouncement is imperative to determine the extent to which the National Assembly can make changes to the Appropriation Bill. This issue has become a recurring factor in the delays that have characterized our budgetary process,” Yusuf said.

Dolapo Ashiru, Head, Stockbroking Service, Lead Capital Plc, expressed discomfort with the jerking up of the budget’s oil price benchmark by the National Assembly. He would have preferred the initial $42.5 per barrel. He is, however, pleased with the money allocated for infrastructural projects.
The Federal Government is committing over N200 billion to improve transport infrastructure such as roads and rail; over N500 billion for investments in works, power, and housing; and N46 billion for Special Economic Zone Projects to be set up in each geopolitical zone.

But Alban Igwe, Deputy National President, Chartered Institute of Logistics and Transport, (CILT), expressed concern that the percentage of the budget allocated to the port access roads is too insignificant to meet the needs of Nigerians. He believes that port access roads are critical to the nation’s economic development as distribution of goods and service starts from the ports.

Segun Omosehin, Managing Director, Mutual Benefits Assurance Plc, believes that the amount allocated to power, infrastructure and housing as well as the transportation sector could directly impact the economy if fully implemented.

“Anything you put on infrastructure will directly impact the economy because it will touch the common man. Also, government took a decisive step to put a specific amount for social welfare, which is to provide cash for the less privileged Nigerians and is highly commendable,” he said.

Uche Uwaleke, associate professor of Finance, Nasarawa State University, said the Federal Government should immediately begin implementation of this year’s budget to improve the country’s economic fortune and impact positively on the lives of the people.

Indeed, the delay in the signing of the budget was largely due to disagreements the Executive arm of government had about the changes introduced into the 2017 Budget proposals by the National Assembly. The Executive was of the view that the changes fundamentally affected some government’s priority programmes and would make implementation difficult and, in some cases, impossible.

It took the National Assembly more than five months to pass the bill while the Executive delayed its signing into law by one month following the controversies that trailed it. The National Assembly significantly adjusted the budget proposal that was presented by President Muhammadu Buhari on December 14, 2016. It increased the budget from N7.298 trillion to N7.44 trillion. It also increased the budget benchmark from $42.5 per barrel of crude oil to $44.5 per barrel. It passed the bill on May 11, 2017.

Sadly, the disagreement between the Executive and the Legislature almost stalemated the signing of the bill into law if not for the last-minute horse trading between the two arms of government to re-instate the budgetary allocations for all the important executive projects, such as the railway standard gauge projects, the Mambilla Power Project, the Second Niger Bridge, the Lagos – Ibadan Expressway, among others, which they had reduced to fund some of the new projects they introduced.

The re-instatement would be by way of an application for virement by the Executive that would be expeditiously considered and approved by the National Assembly. “It is as a result of that understanding and the outcome of our detailed engagements that we feel able to sign the 2017 Appropriations Bill into law today,” Osinbajo said.

Another controversy that almost stalled the 2017 Appropriation Act was the propriety of having the Acting President perform the rite of signing the budget in place of ailing President Buhari. However, this obstacle was set aside by a press statement issued by Garba Shehu, Senior Special Assistant on Media to the President. “Following the receipt of a full brief on the 2017 Appropriation Bill as passed by the National Assembly, and to buttress the unity at the highest level of government, President Muhammadu Buhari has indicated that it is in the interest of the nation’s economy for the Acting President, Professor Yemi Osinbajo, to sign the Appropriation Bill into law,” Shehu said.

He added that in a letter dated June 10, 2017, which he personally signed and addressed to the Minister of Budget and National Planning, Senator Udoma Udo Udoma, the President also he was “pleased by the joint resolution that the Executive would submit next year’s budget proposals by October 2017 and the National Assembly will conclude the Appropriation process by December 2017, so that the country can return to a normal fiscal period from next year onwards.”