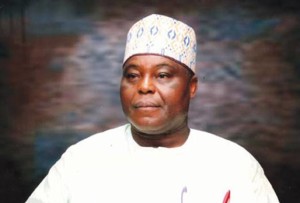 The $2.1 billion arms purchase deal currently being investigated by the President Muhammadu Buhari-led government is a hoax, the chairman of DAAR Communications, Chief Raymond Dokpesi, has claimed.

Mr. Dokpesi, a chieftain of the People’s Democratic Party (PDP) is standing trial for allegedly collecting N2.1 billion of the cash from the erstwhile National Security Adviser (NSA), Sambo Dasuki; and is on bail.

Speaking for the first time since he regained freedom on Wednesday at his Abuja residence during his investiture as Patron of the PDP Youth Vanguard, the DAAR Communications boss described the arms deal saga as a ruse.

“I must hasten to assure you that there is nothing like the much flaunted $2.1 billion arms gate. The competent courts of our land would sooner or later prove this coinage aimed at decimating the leadership and membership of our great party to be nothing but a hoax.

“It (arms scandal) does not exist. It’s a figment of the imagination of the present government. It’s about the persecution of Sambo Dasuki, Tony Anenih, Olisa Metuh and others. We will be made proud when we start our defence in court”, he told his guests.

In apparent reference to the Buhari-Idiagbon military regime of 1984/85, Dokpesi continued, “Some of us are reminded of the events of 1984/85 which by any stretch of comparison are similar to the unfolding events today.

“As I have said not too long ago, we must stand resolutely united, especially in the face of this momentary political adversity. For one thing, I say again that the PDP is not dead, is not dying and will not die.”

He described free press as one of the important elements that help to check the monstrous power of the state, adding that DAAR Communications has from inception been at the fore front of the fight against impunity and promotion of democracy even from the military days.

“We have weathered the storm of oppression, we have been vilified many times, we have also been persecuted in our constitutional duties to make government and its officials accountable to the Nigerian people but we never wavered.

“During the infamous third time tenure elongation agenda, we dared to speak up, but speak up we did. We have always been on the part of human rights, citizen participation in the democratic process, transparency and accountability.

“These ideals have not changed and will never change. I assure you ladies and gentlemen, the youth and vitality of this nation, our faith in Nigeria remains unshakable.

“We will support any policy of government that seeks to promote the ideals of good governance. But we should also not be cowed to speak up where we disagree,” Dokpesi added.

He accused the ruling All Progressives Congress (APC) of attempting to impede the nation’s journey to political maturity through the manipulation of the federal system to serve purely partisan interests.

According to him, the PDP was experiencing a massive persecution, political vendetta of the kind never before seen in the land and targeted at the leadership, membership and sympathizers of the opposition by the government of the day.