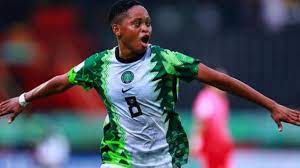 Following the Falconets’ 1-0 win over South Korea in their second Group C match of the U-20 Women’s World Cup in Costa Rica, thanks to a superb goal from Esther Onyenezide that sent Nigeria into the quarter-finals of the tournament, creative midfielder Onyenezide is confident about the chances of the team winning the tournament.

The Falconets defeated France 1-0 on Friday in Group C’s opening match with striker Flourish Sabastine grabbing the winner, while Onyenezide’s strike on Sunday helped the side to another 1-0 win over Korea, to book their ticket to the last eight.

“We are the giants of Africa, we are not scared of any country. From our training and the last qualifiers, we know that we can beat any team in this tournament.”

“Big names don’t matter to us, I trust my teammates that we can do it, we did it in the qualifiers and we will make Nigerians proud.

“We will play each game the way they come, even if it’s going to be tough, we will show the world we are champions of Africa.”

Onyenezide, who has been commanding in midfield and drew some fouls for her troubles, put Nigeria ahead against the Koreans in the 83rd minute with a thunderous effort from outside the box, which goalkeeper Kim Kyeonghee had no answer to.

Nigeria will face Canada in their final group game at the Estadio Alejandro Morera Soto, Alajuela in the early hours of Thursday.