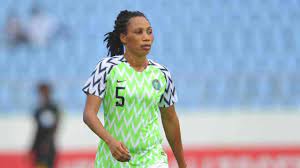 Super Falcons captain, Onome Ebi says the team has put behind them the disappointment of their defeat to South Africa and are rearing to go again against Botswana.

The West Africans started the defence of their title on a disappointing note, going down to a 2-1 defeat against Banyana Banyana of South on Monday night.

Randy Waldrum’s side have a chance to redeem their image when they take on Group C leaders Botswana at the Prince Moulay Al-Hassan Stadium, Rabat on Thursday (night).

And the veteran defender is adamant the Super Falcons can kick-start their campaign with a win against the debutants.

“We feel bad to have lost the opening match, and against South Africa for that matter, but we have been able to put that behind us,” the 39-year-old told said.

“We resolved immediately after the match that we will give what it takes to win all remaining games.

“There is no need for too many words. All we want to do is get the win against Botswana to restore our confidence, and then we can take things from there,” she added.