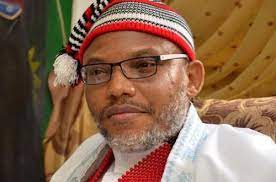 The British government has a hand in the alleged ‘abduction’ of leader of the proscribed Indigenous People of Biafra (IPOB) Nnamdi Kanu in Nairobi, Kenya, his lawyer, Ifeanyi Ejiofor has alleged.

Mr Ejiofor made the accusation on Wednesday while speaking on Arise TV Morning Show. He also accused the British Government and the British High Commission of not doing much to help Kanu despite being a British citizen.

Ejiofor wondered why the Commission has not visited Kanu since he was brought to Nigeria. He noted that unlike Kanu’s 2015 arrest when the Commission was regularly visiting him while in detention, the British Commission is paying lip service to helping him this time around.

“Because some times in 2015 when my client was arrested I know how they were keeping in constant communication with him and visiting him regularly both when he was in DSS custody and when he was transfered to prison.

“But as at yesterday a British national was arrested and till date they have not visited him even when we have officially notified them of the situation.

“As at the time he was arrested, he was arrested as a British national because he had renounced his Nigerian citizenship over 5 years ago. And they are still talking about offering him consular services”, he said

Ejiofor cautioned the media to stop describing the ordeal of his client in Kenya as an arrest, arguing that it was a clear case of abduction, illegal imprisonment, torture and extraordinary rendition.

He said the manner he was taken and the manner Yoruba Activist, Sunday Igboho was arrested were completely different. “At the time he was arrested, his associates in Nairobi started looking for him. They searched in all the Police stations and other law enforcement agencies and he was nowhere to be found.

“In the case of Sunday Igboho, he was arrested in Benin Republic and taken to custody and is being subjected to trial. His arrest was announced but in the case of my client he was detained in an illegal facility for 8 days after which he was renditioned back to Nigeria,”he said.