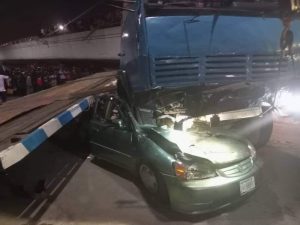 The Lagos State Traffic Management Agency (LASTMA) said via its Twitter handle that the “flat body truck” veered onto the service lane of the road and trapped a Honda car.

“Earnest effort is currently being made towards evacuation.”

As of the time of filing this report, the agency had yet to say if there were any casualties.

But a Twitter user said that they found the car owner dead.

“@Gidi_Traffic An aged unidentified man was found dead as a truck fell on his Honda Accord car right in front of UBA Ojuelegba axis.

“ (It) Took over 4 hours to get rescue but all efforts were futile because the man suffocated and died already.”

This is not the first time such accidents are happening, this year alone, two trucks have nearly lost control and fell off the bridge. The federal government has been urged to either stop trucks from using the bridge, or ban very old trucks on Lagos roads.