The High Court lacks the powers to order the deletion of Section 84(12) of the Electoral Act 2022, the National Assembly has told the Court of Appeal.

It urged the appellate court to order the retention of the section, adding that Justice Evelyn Anyadike of the Federal High Court in Umuahia erred in law when she ordered the Attorney-General of the Federation, Abubakar Malami (SAN), to delete it. 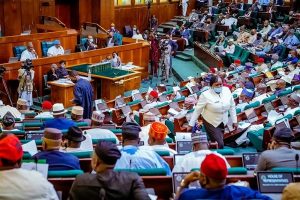 The section provides that “no political appointee at any level shall be a voting delegate or be voted for at the convention or congress of any political party”.

In an appeal against the judge’s verdict, the Federal lawmakers raised five grounds of appeal on why the court should set aside the March 18 judgment.

It is also asking that the case be heard before the political parties hold their national conventions to select candidates for next year’s general elections.

Not determining the appeal before the deadline for the submission of the list of candidates will defeat the purpose of the law, the National Assembly said.

The Independent National Electoral Commission (INEC) has given the parties June 3 deadline to complete the conventions.

The lawmakers, through their 18-man legal team, led by Dr. Kayode Ajulo, based their appeal on five grounds, namely:

The National Assembly said: “The record of appeal confirms that the subject matter of the first respondent’s suit before the trial Federal High Court revolves around the determination of the constitutionality or otherwise of Section 84(12) of the Electoral Act, 2022.

“The section regulates the internal democracy of political parties in Nigeria, with particular reference to the conduct of conventions or congress of any political party in Nigeria.

“There was sufficient evidence before the lower court that the interest of the National Assembly empowered to make laws for the regulation of internal democracy within political parties, including making laws for the conduct of the party primaries, party congresses and party convention pursuant to the provision of Section 228 of the Constitution of the Federal Republic of Nigeria, 1999 (as amended), would be affected by the determination of the constitutionality or otherwise of Section 84(12) of the Electoral Act by the trial Federal High Court.

“The principle of law is that where a necessary party is not joined to a suit, the trial court ought to have suo motu directed a joinder of the necessary party for a just determination of the interest of same.

“Having not joined the appellants herein as defendants at the trial court, the learned trial judge had the prerogative and responsibility to ensure that the proceedings agree with the justice of the case by directing the joinder of the appellants as parties to the suit before determining their interest.”

The National Assembly claimed that its powers were prejudiced by the court when Section 84(12) was declared unconstitutional, null and void without joining the appellants.

The National Assembly faulted the Federal High Court judge for not giving it a fair hearing by denying it an opportunity to be heard.

It alleged that the judge allegedly occasioned a miscarriage of justice.

It said: “Fair hearing is a constitutional right that underlines the adjudicatory power of the court to determine any case.

“Had the court afforded the appellants an opportunity to be heard by joining them to the suit, its resolution on the case would have been different.

“The appellants had no knowledge of the pendency of the suit and the proceedings conducted therein, but there was evidence before the court indicating that their interest as the federal legislative arm of government would be affected.

“The proceeding conducted and judgment delivered by the court in the absence of the appellants is a nullity.” The National Assembly said it was wrong of the judge to rely on Sections 66(1) (f), 197(1) (f), 137(1) (g) and 182(1) (g) of the 1999 Constitution to nullify Section 84(12) of the Electoral Act. It said the sections only relate to public servants and do not include political appointees.

On the plaintiff’s locus standi, the National Assembly claimed that he did not sufficiently disclose to the lower court how his constitutional rights, as a political appointee/officeholder, had been or were likely to be breached.

“It is trite law that a person instituting an action before a court of law must have the legal capacity to initiate such suit before the court can invoke its jurisdiction.

“The first respondent also failed to show a breach that is higher and above that of the ordinary citizens with respect to the constitutionality or otherwise of the provision of Section 84(12) of the Electoral Act,” the lawmakers said.

The National Assembly also claimed that the judge exceeded his jurisdiction when he ordered the Attorney-General of the Federation) to delete Section 84(12) from the Electoral Act, 2022 with immediate effect.”

It said nowhere in Section 6 of the constitution or elsewhere is the legislative power of the federation vested in the courts.

“The position of law is clear to the effect that the court neither makes law nor does it possess any power to amend any statute.

“The learned trial judge thereby usurped the legislative powers of the National Assembly by directing the AGF to delete the provision of Section 84(12) of the Electoral Act, 2022 with immediate effect.

“The order of the learned trial judge directing the second respondent to delete the provision of Section 84(12) of the Electoral Act, 2022 is therefore null and void and ultra vires of the jurisdiction of the Court as donated by the Constitution of the Federal Republic of Nigeria, 1999 (as amended),” it said.

The National Assembly sought an order to allow the appeal and set aside the judgment delivered by Justice Anyadike. In an April 12 letter to the Presiding Justice, Owerri Judicial Division, the National Assembly asked the Court of Appeal to hear its case before the national conventions.

The Assembly demanded an accelerated hearing before the deadline for the submission of the list of candidates for the general election. The letter, which was signed by the Assembly’s counsel, Dr. Kayode Ajulo, was exclusively obtained from the court by The Nation.

It said in part: “We humbly submit that given the special circumstance and the nature of the plaintiffs’ suit at the lower court and bearing in mind that same borders largely on the conduct of political party congresses and conventions, if the applicants’ motion and appeal are not given expedite and accelerated hearing before the deadline for the submission of list of candidates for general election, the intentions of the National Assembly in making the provisions of Section 84(12) of the Electoral Act, 2022 would be defeated.

“In the circumstance, we, therefore, most humbly apply for expedite and accelerated hearing of both the Motion on Notice for Leave to Appeal as interested parties and the Appeal for the determination of the constitutionality or otherwise of Section 84(12) of the Electoral Act, 2022.We are most grateful.”