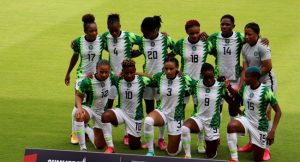 Nigeria’s Super Falcons are ready to put behind them the loss to Jamaica and determined to earn victory against Portugal on Sunday in the second of their three-match programme in the Summer Series tournament taking place in the United States of America.

Missing several key players who were held back by either delayed issuance of entry visa or injuries, the African Champions lost 0-1 to the Jamaicans on Thursday at the BBVA Stadium in Houston – the same venue where they confront the Portuguese on Sunday evening.

Deneisha Blackwood, who plays her professional club football with Houston Dash (the club that uses the BBVA ground), scored in the 54th minute to condemn the Super Falcons to their first defeat in eight games.

Goalkeeper Tochukwu Oluehi stopped Blackwood’s penalty in the first half and wished the outcome was different. “I wasn’t happy with the goal. The defence did well, remember we are a new team with time we will be better. We just need to correct our mistakes and ensure we beat Portugal.”

The Super Falcons had won all three matches at the Turkish Women’s Cup Tournament in Antalya in February – the first account under American coach Randy Waldrum.

After the clash with the Jamaicans, Bayelsa Queens’ midfielder Celine Ottah (one of 10 home-based professionals in the Falcons’ squad), joined up with the contingent at the Marriott Marquis Hotel in Houston. Camp sources have confirmed to that Belarus –based experienced defender Onome Ebi and team captain Asisat Oshoala will hit the team’s camp before the clash with Portugal on Sunday, having flown out of their bases in Europe on Saturday.

In addition to four-time African Player of the Year Oshoala and the evergreen Ebi, Coach Waldrum had to do without the young, agile and stout-hearted goalkeeper Chiamaka Nnadozie (who is still stuck in France) midfield orchestrators Ngozi Okobi-Okeoghene and Halimatu Ayinde. Former youth international Nnadozie has been the team’s number one since the last FIFA World Cup finals in France.

The game against the Portuguese is also being seen in the larger context of a preparatory session for the Falcons’ last match in the Summer Series – a clash with four-time world champions and four-time Olympic champions USA at the Q2 Stadium in Austin, also in the State of Texas.

Team USA has beaten the Super Falcons in every encounter at the FIFA World Cup and the Olympics. But Wednesday’s tie will be the first friendly match involving both teams. In fact, the Americans have only ever played friendly matches against only one African team previously – South Africa’s Banyana Banyana.