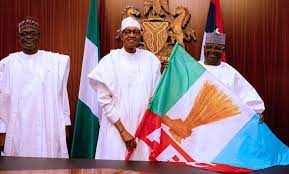 There was stampede at the ongoing NationaI Convention of the All Progressive Congress, at the Eagles Square, Abuja. More than 30 people were injured, including a pregnant member of the party.

Police dogs were however deployed to control the large crowd of delegates.

According to an eyewitness, police and Civil Defence Corps chased the delegates and the party supporters with dogs.

THISDAY gathered that the delegates had stormed the venue waiting for clearance since 6:30am.

Delegates and other party men and women lost their patience and started pushing themselves as they complained about the slow pace of the clearance.

It was gathered that the police had to use teargas as the crowd became uncontrollable and in the process, stampede ensued.

The policemen were seen beating people with batons as they tried to control of the crowd.

Some were said to have sustained injuries at the entrance of the venue where the massive crowd was waiting to be screened by the security agents.

It was learnt that the screening pace was slow because of the large crowd, when the stampede occurred and the security agents at the gate were helpless.

Some APC stalwarts and leaders were seen coming to the venue at about 12 noon.

The lateness was because of the various meetings to finalise arrangement for the consensus candidate.