Senate Spokesman Blasts Malami, Calls Him a Disgrace to the Government 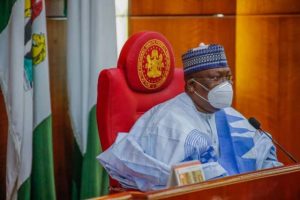 The spokesman of the Senate of the Federal Republic of Nigeria and senator representing Osun Central Senatorial Zone, Senator Ajibola Basiru has criticized the attorney-general of the federation (AGF) Abubakar Malami saying that he is “rubbishing” the administration of President Muhammadu Buhari. Basiru said this in reaction to comments credited to the AGF.

In a statement on Thursday, Basiru said Malami has no business occupying the office of the AGF, adding that the responsibility to promote unity should be that of everyone.

The senator said equating the activities of nomadic herdsmen destroying peoples’ means of livelihood with others legitimately “carrying on businesses by selling spare parts in their shops stands logic on its head”.

“Anyone who cannot rise above primordial sentiments and pursue a parochial ethnic agenda need not occupy a position of trust especially at this time of sectional agitations,” he said.

“It was not dignifying of the status of the nation’s attorney-general and minister of justice to make such remarks.

“Those who have no meaningful contributions to national discourse operating on the basis of equity and justice to keep quiet and stop rubbishing the Buhari-led APC government.

“These kind of statements have made Nigeria a laughing stock in the comity of Nations and they ridicule the administration of President Buhari. These statements are not giving hope to those at the receiving end of the activities of the herdsmen.”