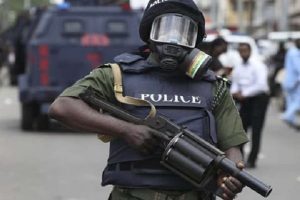 Men of the Nigeria Police Force, on Thursday, shot dead six suspected members of an armed robbery gang, who attacked workers at the Ebonyi International Airport, a new generation bank as well as traders at the popular Eke Market in the Onueke community, Ezza South Local Government Area of Ebonyi State, on Tuesday.

The gang had gone on a rampage in the area killing one policeman and injuring another during a gun duel. The gang members raided a new generation bank in the area and shot the branch manager, before proceeding to the busy Eke Market, where they dispossessed traders of their money and other valuables.

Eyewitnesses said they operated in a SUV and motorcycles.

The Ebonyi State Commissioner for Infrastructure for Concession, Fidelis Nweze, who was at the airport site waiting for Governor David Umahi, who was said to be coming from his hometown, Uburu in the Ohoazara Local Government Area for a routine inspection of the site, was among the victims robbed.

It was gathered that Nweze lost his laptop and other valuables to the robbers, who broke into his SUV. The hoodlums, it was further gathered, later proceeded to a quarry site at Umuoghara in the Ezza North Local Government Area of the state, where they robbed and shot several quarry dealers.

Worried by the development, Umahi convened a security council meeting on Wednesday and directed security agencies to ensure that the perpetrators were brought to justice within 72 hours.

Sequel to the governor’s directive, the state police command, it was gathered, launched a manhunt that led to the killing of six members of the gang during an exchange of gunfire at their hideout in Oriuzo village, Ezza North Local Government Area of the state.

According to a police source, many of the hoodlums fled with bullet wounds. It was alleged that only three of the suspects were killed during the gun battle with security agents, while three others arrested during the raid were allegedly killed in police custody.

The personnel subsequently arrested two suspects in a shrine and three others elsewhere.

The Commissioner of Police in the state, Aliyu Garba, confirmed the killing of six members of the gang by the personnel of the command.

Aliyu, however, said it was not true that three of the gang members were killed in police custody, adding that the command recovered arms and ammunition as well as a Honda Pilot SUV from the suspects.

The CP stated, “My brother, based on your message to me, you should have approached the PPRO to reply you. But on the other issue that some suspects died in our custody, there is nothing like that. There is no truth in that.

A statement on Sunday by the force spokesman, Frank Mba, said efforts were ongoing to arrest other fleeing members of the gang and their spiritual godfather, the chief priest of the shrine.

“A Honda Pilot SUV with number plate ABJ 163 NV used in the foiled bank robbery was also recovered by the police.

“Unrelenting in their quest to apprehend the remaining suspects, the police team traced the suspects to a shrine, where the robbers usually go for mystical powers before embarking on their robbery operations.

“Two of the suspects were eventually arrested from the supposedly safe haven – the shrine, which led to the arrest of additional three members of the gang. Meanwhile, efforts are ongoing to arrest other fleeing members of the gang and their spiritual godfather, the chief priest of the shrine.”

Meanwhile, a policeman attached to the Abaomege Police Station in the Onicha Local Government Area of Ebonyi State was killed on Saturday when gunmen attacked the station.

It was learnt that the gunmen attacked the station around 8pm. Another policeman, who was also on duty, sustained severe injuries during the attack and had been hospitalised.

A Technical Assistant to Governor David Umahi, who hails from the area, confirmed the attack on the telephone.

The governor’s aide stated, “The injured officer has been taken to an undisclosed hospital in Abakaliki for treatment.

“The gunmen attacked the Abaomege Police Station on Saturday evening. There is no report of casualty for now. But one policeman is said to be missing, while another officer sustained serious injuries. But he has been rushed to hospital in Abakaliki for treatment.”

The state police command confirmed the incident on Sunday.

The Police Public Relations Officer in the state, Mrs Loveth Odah, said, “Actually, one of our men was killed last night in Abaomege when some gunmen invaded the police station. One of the men on duty also sustained injuries. He is currently receiving treatment in an undisclosed hospital. Investigation is ongoing.”

Meanwhile, police operatives in Ebonyi State have also intercepted 753 pieces of live ammunition of General Purpose Machine Gun concealed in a sack being transported in a commercial vehicle from Abakaliki to Umuahia in Abia State.

According to the force spokesman, comprehensive investigations aimed at bringing to justice all persons linked to the crime are ongoing.

In the Federal Capital Territory, the police arrested six suspects for ‘one chance’ robbery in the Zuba and Lugbe areas.

According to a statement by the FCT police spokesperson, Mariam Yusuf, the suspects, who paraded themselves as commercial drivers, confessed that they lured their unsuspecting victims (mostly women) into their operational vehicle before carrying out their nefarious act.

In a related development, the Joint Security Team of the FCT refuted reports that bandits were planning to attack the nation’s capital, noting that it had adopted the use of motorcycles, horses and other technical means of gathering intelligence to check criminality within the FCT.