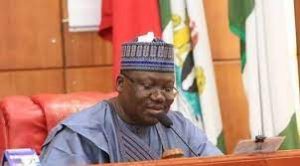 Senate President Ahmad Lawan yesterday said the Petroleum Industry Act 2021 is not perfect and will be amended in future.

To him, enacting the law after so many years is significant even if all expectations were not met.

The three per cent allocated to the Host Community Development Trust Fund in the Act has led to outrage.

Lawan told reporters in Abuja: “The host communities are winners as well. It may not be necessarily exactly what some of them had hoped.

“But, from zero to over $500million…and with time, such issues will be further addressed.

“It is about how we can prudently and transparently deploy this $500 million in the host communities.

“Because we are human beings, no Act of human beings could be perfect. So when we can see issues, the National Assembly is there. Bring them for amendment.

“Even the most difficult issues can still be brought back to the National Assembly if it is worthwhile to do so.

“I believe there is no need for us to be emphasising the problems rather than the prospects.”

Chairman of the Southsouth Senate Caucus, Senator George Thompson Sekibo, told our correspondent that there will be an opportunity to reassess the law in future.

He said: “First and foremost, the President has done the unimaginable. This PIB has been in the process for the past 20 years.

“It has gone through three presidents, including him. The mere fact that it has been signed into law calls for applause and congratulations to both the President, the National Assembly and the entire nation.

“The three per cent host communities fund that has now been approved in the Act is the very first time when such an allocation has been given to the people directly.

“I am sure a proper regulation will be put forward to ameliorate all those problems.”

The Progressive Governors Forum (PGF), in a statement in Abuja by its Chairman and Kebbi State Governor Abubakar Atiku Bagudu, hailed President Buhari for assenting to the Bill.

He said: “After more than two decades of endless national debates and stalemate, there is today a new Petroleum Industry Act, which has provided six months transition for the emergence of the new institutional framework for the operations of oil and gas industry in the country.

“The Progressive Governors Forum (PGF) commends Mr President for this historic feat of moving the nation forward to a new democratic era of governance and business management of the oil and gas industry.”

Speaking on Channels, he said: “I am excited over the Petroleum Act. I commend the National Assembly and President Buhari for a job well done, and particularly Mr President for breaking the jinx of the 1969 Petroleum Act.”

According to the governor, creating a conducive working environment will enhance return on investment and create a win-win situation for both oil companies and host communities.