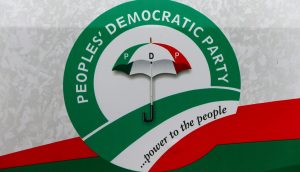 The Peoples Democratic Party Governors’ Forum will today (Monday) meet in Port Harcourt to review the party’s readiness to rescue Nigeria in 2023.

The   Director-General of the PDP Governors Forum, Cyril Maduabum, disclosed   this on Sunday in a statement titled ‘PDP Governors meet in Port Harcourt to consolidate on rescue and rebuild Nigeria project’

Although Maduabum’s statement did not state that the forum would discuss strategies for winning 2023 elections, it was learnt that the governors would talk about zoning of the party’s presidential ticket and advise the National Working Committee on where the slot should be zoned to.

But the director-general in the statement he issued said the meeting would “review the state of the states, the state of the nation and readiness of the PDP to provide the necessary leadership to rescue and rebuild Nigeria.”

According to the statement, the Chairman of the PDP Governors Forum, Governor Aminu Tambuwal of Sokoto State, who will preside over the first meeting of the year, did not disclose the full details on the agenda.

He also disclosed that the party’s National Chairman, Dr Iyorchia Ayu, had been invited to consult with the governors on strategies for executing the rescue and rebuild Nigerian project.

“The PDP governors are working in concert and consultations with other party leaders, particularly the Ayu-led National Executive Committee of the PDP, to craft a credible process and programme for Nigeria’s positive rebirth,” he added.

According to Maduabum, all the elected PDP governors are expected to attend the meeting which will be preceded by a Gala night hosted by Governor Nyesom Wike.

The PDP governors are meeting barely 48 hours before another crucial meeting of the Nigeria Governors’ Forum, to be presided over by Kayode Fayemi of Ekiti State.

Wednesday’s in-person meeting will feature the intervention programmes such as the regular updates from the Nigeria Governors’ Forum State Fiscal Transparency, Accountability and Sustainability Programme team and another on coronavirus Aid, Relief and Economic Security, among others.

Sources close to the secretariat of the NGF informed one of our correspondents that the governors would also discuss the security problem facing their states in particular and the country as a whole.

The PUNCH had reported that several governors, especially those from the North-East and North-West, have lamented the rampant killings and abductions by terrorists.

An aide of one of the PDP governors said they were likely to discuss the zoning of the presidential ticket of the party.

According to the source, the PDP governor’s meeting may advise the new National Working Committee of the party to zone the presidential ticket to the north as a strategy to return to power in 2023.

The source said, “Though the party has earlier said the presidential ticket of the party will be thrown open, preference is being given to the north as a ploy to woo northern voters.

“There are power brokers in the north that don’t want to relinquish power, so it will be in the interest of the PDP to zone their presidential ticket to the north and pick a strong person in the south as a running mate.

“Series of meetings are already going on and I can tell you that the PDP will get it right this time.

“It is possible that the governors may not openly zone the ticket to the north, but hide under the cover that all eligible candidates from across the country should contest the primaries, but the game plan is to field a candidate from the north to weaken the APC.”

When contacted on the telephone, Maduabum said he could not say more than what had been stated in the press release.

On whether the issue of zoning would be discussed, he responded, “The meeting is not about zoning.”