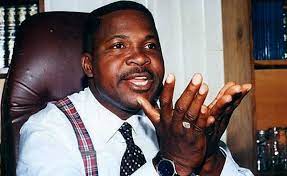 Human Rights crusader and Constitutional lawyer, Mike Ozhekome, has faulted the National Assembly for voting against the electronic transmission of results in the Electoral Amendment Bill. Ozekhome, who spoke in Abuja over the weekend while delivering a special lecture at the 2021 graduation ceremony/prize giving ceremony of Pacesetters’ School Abuja, said the concept of democracy is no longer practiced in Nigeria.

He lamented that the national tragedy witnessed on Thursday and Friday at the National Assembly is for the sole interest of politicians in order to rig the 2023 elections.

“Why do we choose to kill electronic voting when across the world, even Democratic Republic of Congo here are using it. Why are we killing this country? Why are we on a journey of no destination?”

He disagreed with senators elected on the platform of the All Progressives Congress (APC) who claim that the country does not have the capacity to implement electronic transmission of election results.

He argued that the level of telecommunications infrastructure and network coverage available in Nigeria at the moment could effectively sustain electronic transmission of election results across the country.