No comments to show.
News Sport

Super Eagles midfield maestro, Eddy Ogenyi Onazi took his career to a new height when his 85th minutes strike turned the tide against SSC Napoli and handed SS Lazio a 4-2 away victory that secured the club a UEFA Champions league qualification berth. Napoli needed to beat Lazio in Benitez’s final game to qualify for Europe’s elite championship next season but failed after Gonzalo Higuain’s 76minutes missed penalty in their remarkable Serie A finale provided the impetus for substitute Onazi to fire Lazio in front in the 85 minutes before Miroslav Klose sealed the victory in the 90th minutes. 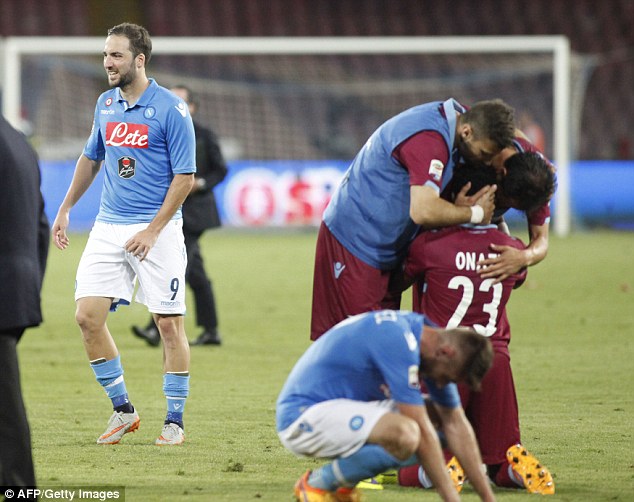 Lazio snatched the win with two goals on the counter-attack in the final five minutes, meaning the visitors to the Stadio San Paolo qualified for the Champions League in Napoli’s place.

The enthralling contest ended with both teams down to 10 men after Lazio’s Marco Parolo and Napoli’s Faouzi Ghoulam were sent off within eight minutes of each other in the second half. Yet the visitors held on for the points that secured them the coveted third position in Serie A, meaning unseeded Lazio could face Manchester United in the Champions League play-offs.

Napoli, meanwhile, have the consolation of Europa League football without Benitez next year.  Afterwards, Lazio manager Antonio Candreva said: ‘This is a huge accomplishment. After the derby loss we were a bit down and disappointed. But we put together a great performance in a tough stadium against a very strong opponent.’

Onazi is expected to join the Super Eagles camping for the crucial AFCON Qualification opener against Chad in Kaduna on June 13, 2015.