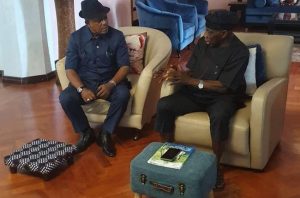 Mr Secondus arrived at the penthouse of the Olusegun Obasanjo Presidential Library (OOPL) in Abeokuta accompanied by other leaders of the party at some minutes past 12 p.m.

They immediately went into a private meeting with Mr Obasanjo. The former president is no longer a member of the PDP, having exited the party in 2015.

The visit is coming when some leaders of the party are calling for Mr Secondus’ removal, in order to chart a way forward for the main opposition party.

Last week, there were protests at the National Secretariat of the PDP in Abuja, as party members asked Mr Secondus to resign. But the party chairman has, however, said he would not step down.