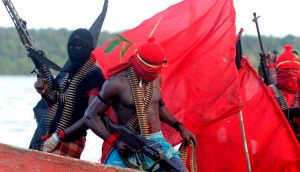 After about three years of absence, the Niger Delta Avengers (NDA), on Saturday, returned with the launch of ‘Operation Humble’ which it said is to cripple the economy through the destruction of oil installations in the region.

Announcing its intention in a statement posted in its website, the NDA promised to ‘humble’ the economy into “permanent recession” through an operation that would also target political actors allegedly collaborating with the Nigerian government to undermine the interest of the people of the Niger Delta.

This is coming barely a month after a former militant leader, Chief Government Ekpemupolo, alias Tompolo, issued a letter to the Federal Government to inaugurate the new board of the Niger Delta Development Commission (NDDC) or risk consequences to critical assets in the region after the expiration of seven days ultimatum.

In its own threat on Saturday, the militant group said it had ordered its foot-soldiers to return to the creeks in preparation for imminent attacks on oil and gas installations.

Entitled: “WE ARE BACK WITH OPERATION HUMBLE,” the militants said they had lost confidence in the Pan Niger Delta Forum (PANDEF) and all other sociocultural groups in the region, elders, leaders and former militants.

The statement read in part:

“There is no gainsaying that the failed country called Nigeria which has fed fat on our God-given wealth is at the brink of total disintegration owing to the security and related challenges across the country; ranging from terrorism and banditry in the North to the secessionist gongs of the Oduduwa people of the South-West and IPOB of the South-East it is obvious that peace in the Niger Deltan and by extension the South-South geopolitical region is the very thin piece still binding this country together.

“It is disheartening that despite being the economic backbone and having resolved to maintain the peaceful environment for the smooth operations of the oil multinationals whose proceeds the country cling unto for economic survival, the Niger Delta and the South-South remain the most underdeveloped with our needs and interests undermined by the failed Nigerian state.

“We decided to suspend our famous, operation red economy‚ which bled the Nigerian economy into recession about four years ago not because we are lazy but for the love we have for our people and out of respect for the voice of the elders of the Niger Delta region who beckoned on us to give peace a chance and avail the government time to act on our demands at the time.

“In a move to remind this government that we have exhausted the very last iota of patience, the High Command of the Niger Delta Avengers have in a meeting held last night resolved as follows:

“We have lost total confidence on all sociocultural groups like PANDEF, the elders of Niger Delta and the bunch of so-called ex-agitators frolicking with the government at our detriment.

“There is no doubt that the Nigerian government has continued to pay deaf ears to our demands and the rising challenges in the country because the pipelines that crisscross our lands her left untouched, allowing dollars to flow into the federal treasury on a daily basis for mismanagement.

“We shall spare no single oil installation within our range of strategic targets marked for destruction in the coming days and we bet the Nigerian Government will be humbled to return to the drawing board and chart an all-inclusive course by the time we are done with our action plan.

“The high command of the NDA has promoted and appointed one of our finest operatives, Field Commander Tu-ere aka Queen of the Creeks to the rank of Brigadier General. She is an experienced field agent who before now was the head of the counter intelligence unit of the NDA, using her connections with top government and security officials to deliver on her assignment.

“Brig. Gen. Tu-ere is the first female to ever attain this level and it is solely out of merit, and is placed in charge by the High Command of the NDA to execute operation humble to the letter.