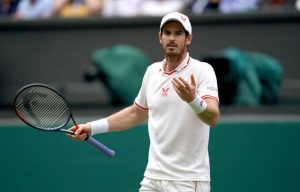 Ahead of the Tennis opening against ninth-seeded Canadian Felix Auger-Aliassime, Andy Murray says he “feels good” as he prepares to defend his Olympic title in Tokyo.

The Briton, who won back-to-back gold medals at London 2012 and Rio 2016, however admits there is anxiety among the team over Covid-19.

Murray has twice required hip surgery after his 2016 outing and is currently ranked 104th in the world.

“I’ve prepared as best as I can. I have tough draws in singles and doubles but I think I have a chance,” he said.

“If I can get through a round or two I’ll start to feel more comfortable. I also have the experience of playing in the Olympics, which I can use to my advantage,” he added.

“It happened to me before the Australian Open and I was gutted,” said Murray, who was unable to travel to Australia in January after testing positive for Covid-19.

“Thankfully I was able to compete in another Grand Slam a few months later, but if you’ve been preparing for something for five years and something like that happens to you it would be brutal.

“So there is an anxiousness, but from what I’ve seen everyone is taking the protocols seriously so hopefully there won’t be too many issues.”

Former world number one Murray won consecutive matches at a Grand Slam for the first time in four years when he reached the third round at this year’s Wimbledon.

The 34-year-old said he needed to weigh up “if all the hard work is worth it” in the immediate aftermath of his third-round defeat by Canada’s Denis Shapovalov, but insists he has no plans to retire just yet.

“It can be hard and after tough losses like that at Wimbledon you question a lot of things,” he said.

“I do still feel like I am capable of playing high-level tennis and when that isn’t the case I will stop playing. But right now I don’t believe that is the case.”

Roger Federer, Rafael Nadal and Serena Williams are among big names not competing in Tokyo but Wimbledon champions Novak Djokovic and Ashleigh Barty are in Japan alongside home favourite Naomi Osaka.