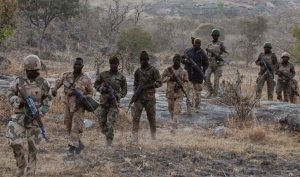 The military, yesterday, disclosed that one of the abducted students of Federal Government Girls’ College, Birnin Kebbi, Kebbi State, has died while five others and two teachers have been rescued.

What is more interesting, according to Kebbi State Police Command is that the vehicle used to convey the kidnapped students and teachers belongs to a High Court judge in the state.

Saddened by the development, the Emir of Zuru, Maj. Gen. Muhammadu Sani Sami (rtd) has charged the General Officer Commanding (GOC), 8th Division Sokoto, Maj. Gen. U. A. Yusuf, to engage his men in more aggressive patrols and effective smart ambushes on the insurgents in the area.

Meanwhile, the Unity Schools Old Students Association (USOSA) has condemned the abduction of students and staff members of the school, saying it was disheartening and a tragedy that must stop.

In a statement made available in Birnin Kebbi, the Director Army, Public Relations, Brig. Gen. Onyema Nwachukwu, said two teachers and five students were rescued after a fierce exchange of gunfire with the criminals.

Nwachukwu said the rescue of the teachers and students followed an initial encounter with the abductors in the early hours of yesterday, after trailing them from Yawuri through Riyao to Sombo community.

The statement noted that at that point, the kidnappers had split into two groups, with one group conveying the abducted children, while the second group conveyed rustled cattle.

The statement explained that the land troops in conjunction with the Nigerian Air Force, who provided close air support during the rescue mission, intercepted the two groups at about 2.30am and engaged them in a gun duel leading to the successful rescue of the teachers and students.

He said that the troops also recovered 800 cattle rustled by the bandits, adding that the gallant troops were still on the heels of the kidnappers in order to rescue the remaining abductees still in captivity.

“Sadly, a casualty was recorded during the exchange. A female student was found to have given up the ghost as a result of exhaustion. The rescued teachers and students will be handed over to the Kebbi State government.

The Nigerian Army appreciates the cooperation so far from good spirited citizens and wish to solicit for more. The Chief of Army Staff, Maj. Gen. Faruk Yahaya, has directed the Commander to spare no effort until all the abducted persons are safely rescued and reunited with their loved ones,” the statement added.

According to the spokesman of the Police Command, Nafi’u Abubakar, the bandits hijacked the vehicle on Birnin Yauri road. He also stated that reports claiming that the kidnapped students numbered up to 50 were false.

He said: “The attention of the police has been drawn to reports made by some media stations that a police vehicle was used in kidnapping about 50 students of the FGC.

“A White Hilux Van with registration No. KBSJ 29 belonging to a High Court judge with inscription of Kebbi State Judiciary, hijacked by bandits on Birnin Yauri road, was the one used in the kidnapping and not a police vehicle as stated by some media stations.

“The command wishes to make it clear and set the records straight that yet to be ascertained number of students are still missing as rescue operation is still ongoing.”

The emir’s charge was contained in a communiqué signed by the Secretary, Zuru Emirate Council, Hassan Muhammad Gado, which was released during the official working visit of the GOC to Zuru, yesterday.

According to the emir, the security agencies must be proactive and ensure prompt response to distress calls from communities.

He said: “I express confidence on the capacity of the GOC, given his antecedent in the Nigerian Army and wish him success. The Nigerian Army remains the last hope of the masses when it comes to protection of lives and property of the citizens. Nigerian Army must be wiser and better than bandits,” he added.

The emir also urged the federal and state governments to provide logistics to the military in order to enable them to effectively combat banditry.

“The local and state governments also need to provide access roads for effective security operation and also Nigerian Army should provide good motivation to their men,” he said.

Responding, the GOC said the aim of his visit was to solicit the support of all the traditional rulers in the area, promising that he would confront bandits and other criminals in the area with his men.

In a statement issued yesterday by the President-General of USOSA, Lawrence Anirejuoritse Wilbert, the group also decried the killing of a police officer and infliction of injuries on students and staff members.

He said: “Every student must be accounted for; this tragedy must stop. It is disheartening that the incident occurred at a time when the media is awash with fresh assurances by the Federal Government and the security agencies that everything is being done to rid the country of bandits and insurgents and safeguard lives and property of all Nigerians.

“We are particularly piqued by the fact that the bandits were able to carry out their dastardly acts in broad daylight amidst clearly insufficient resistance. USOSA views this latest onslaught on innocent schoolchildren as utterly insane and wicked. We deplore the reprehensible attempt to truncate the academic pursuits of Nigerian children and the country’s peace and security. The association therefore insists that the government should immediately secure the safe return of all the abductees and apprehend the perpetrators and master-minds of the attack.”

Wilbert called for declaration of a nationwide state of emergency on security, albeit with retention of all democratic structures and offices.

He argued that continued criminal activities despite expended colossal sums of money on procurement of arms and ammunition to counter criminality in the country and deterioration of the security situation nationwide was indicative that more cogent action needed be taken if the marauders must be crushed once and for all.