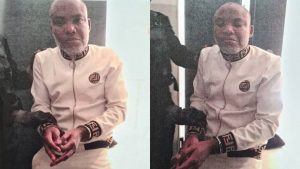 Leader of the Indigenous People of Biafra, Nnamdi Kanu, who has been rearrested and brought back to Nigeria, is expected to be re-arraigned before the Federal High Court for the continuation of his trial on July 26. The IPOB leader was intercepted on June 27.

This was made known at a briefing in Abuja on Tuesday by the Attorney-General of the Federation, Abubakar Malami.

According to the Attorney-General of the Federation, Abubakar Malami, Justice Binta Nyako of the Federal High Court in Abuja has granted the Federal Government’s application to detain the IPOB leader in a DSS facility ahead of the continuation of his trial.

Justice Nyako also granted the application for the accelerated hearing of his trial to July 26 and 27th as against the earlier adjourned date of October 20.

Mr Kanu has repeatedly called for the breakaway of a huge chunk of southern Nigeria to form the Republic of Biafra.