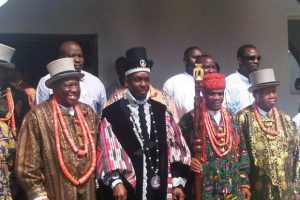 THE umbrella body of Ijaw elders, the Ijaw National Congress (INC), has warned the Federal Government against taking their silence for granted in the face of insecurity, injustice, nepotism, banditry and other problems plaguing Nigerians.

The President of INC, Professor Benjamin Okaba, gave the warning at a news conference in Yenagoa, Bayelsa State capital, on Friday.

He said the Ijaw people had watched with deep consternation the gradual decline of the Nigeria state to the precipice, as it embarks upon a rudderless mission to self-implosion. He said rather than douse the rising tension in the country resulting from growing insecurity, mass poverty, disillusionment and the unbridled atrocities perpetrated by well-known and unknown actors, the comments by some notable and equally influential political and ethno-religious leaders in Nigeria are insipidly conflagratory and divisive.

Okaba, a Professor of Sociology at the Federal University, Otuoke, said one major reason for the detestable situation was the heightened injustice and marginalisation of Nigerians, particularly of the minorities (including the Ijaw ethnic nationality) who have endured for too long. He said despite the huge sacrifices the Ijaw people had made and are still making to the birth and sustenance of the country, they have never been fairly treated by the Nigerian nation.

Okaba said his address also served as an advance notice to all Ijaw people, their neighbours, particularly in the Niger Delta region, other oppressed and deprived people and the Nigerian state, preparatory to the convocation of an all Ijaw summit that would ultimately decide on the way forward in very specific terms.

He said their current resolve for self-determination and self-actualisation could only be reversed if urgent steps were taken by the powers that be to urgently and sincerely address the minimum conditions precedent to guarantee the continued commitment of the Ijaw to the Nigerian project. He advocated the restoration of true federalism under a new constitution enacted by the people wherein a lean exclusive legislative list is prescribed for the federal tier of government. He also called for the restoration of Ijaw territory as nonbalkanised administrative and political federating unit (s) for reassurance of the Ijaw development pursuit.

Okaba equally called for the repeal of all obnoxious and discriminatory laws and policies that have continuously undermined their fundamental human and environmental rights as indigenous people of Nigeria.