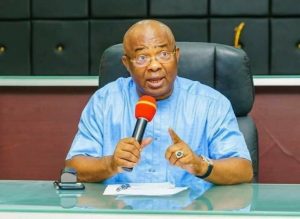 Imo State Governor Hope Uzodinma has sacked 20 commissioners and dissolved the State Executive Council. This was announced on Wednesday shortly after the state executive council meeting in Owerri, the state capital.

The Commissioner for Information and Strategy Declan Emelumba told journalists that the reason for the dissolution is to rejig the activities of the state government after one year in office.

He said the governor appreciates the dismissed officers for their contributions to the Uzodinma-led administration.

“He appreciated them for their contribution towards all the success of the government and wish them well in their future endeavours,” Emelumba said.

Out of the 28 commissioners, eight were left to carry on with their activities for continuity and strategic administration.

The commissioners are Health, Information, Tourism, Women Affairs, Works, Finance, Youths, and the Ministry of Technology.

Emelumba also assured that a new executive council will be constituted soon.

The sacking of the twenty commissioners comes one month after the governor reshuffled his cabinet and appointed new Commissioners for Finance and Health.