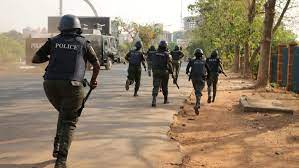 The Human Rights Watch has called on the Nigerian government to wake up to the deteriorating security situation encircling the nation’s capital, Abuja and environs. The international human rights group made this call against the backdrop of series of attacks and threats within close proximity of Nigeria’s seat of government in Abuja by Islamist and other armed groups are causing fear and apprehension among citizens in the Federal Capital Territory (FCT) and across the country.

The Nigeria Police Force has assured citizens that it has scaled up security in the federal region, which includes Abuja, but these attacks and threats, even to kidnap the president, indicate an alarming deterioration of the nation’s security situation. The authorities need to ensure adequate security for all civilians while respecting human rights.

“The recent events unfolding in the capital confirms many Nigerians’ fears that the threat from Islamist insurgents and other armed groups are now national threats that have reached critical levels,” said Anietie Ewang, Nigeria researcher at Human Rights Watch. “The ability of the groups to expand outside their base even to the nation’s capital means that the authorities need to greatly expand their efforts to protect people.”

For over a decade, Nigeria has been embroiled in conflict in the Northeast region with Boko Haram, an Islamist insurgency group, and its breakaway factions including the Islamic State West Africa Province (ISWAP). These groups kill and kidnap people in their quest to topple the government and establish an Islamic state. In the Northwest, years of conflict between nomadic herders, mainly of Fulani ethnicity, and farming communities of Hausa ethnicity have given rise to a proliferation of powerful criminal gangs with sophisticated weaponry that terrorize communities and kill, pillage, and kidnap people, including schoolchildren, for ransom.

On July 5, armed men attacked a minimum security prison in Kuje, a community within the federal district, about 40 kilometers from Abuja. During the attack, for which the Islamic State West Africa Province claimed responsibility, about 900 inmates escaped, including more than 60 Boko Haram suspects. Security analysts have also highlighted the involvement of Ansaru, an Al Qaeda-backed splinter faction of Boko Haram, in the attack, though the extent of its involvement is unclear.

On July 25, unidentified assailants killed six officers of the presidential guard brigade, an elite force of the army responsible for protecting the president and the federal area, in Bwari, a community in the federal region where a campus of the Nigeria Law School is located. The officers were deployed to provide security after the management of the law school received a letter from unidentified sources threatening an imminent attack on the school.

In response, the Federal Education Ministry announced the immediate closure of all federal government colleges in the federal region to ensure students’ safety, affecting thousands of students.

On July 29, media reported that gunmen attacked a military checkpoint in the federal region along the Abuja-Kaduna Highway, which has become notorious in recent years for kidnappings and other attacks against citizens.

On July 24, a video surfaced on social media showing kidnapped victims of a March attack by suspected members of ISWAP on a train that left Abuja, heading for Kaduna state, being beaten by their captors. In the video, members of the armed group threatened to kill or sell off the victims as captives to others if the government did not adhere to their demands, including the release of some ISWAP members and payment for ransom. They also threatened to kidnap President Muhammadu Buhari and other government officials.

These incidents as well as other reports of kidnapping in the federal region have spread fear, panic, and apprehension among citizens.

A local taxi driver, who carries passengers from Abuja to Mararaba and Nyanya in neighboring Nasarawa state, told Human Rights Watch: “The kind of fear I am experiencing is overwhelming, as I am moving on the road. I don’t know where or how it [an attack] can happen, so I am always on high alert. I panic at every checkpoint because I don’t know if it is bandits or police there. Even the passengers are suspects because there is no way of knowing if I am carrying a bandit or a terrorist that can harm me.”

Another taxi driver plying the same route said: “The reports are so alarming and have made everyone very conscious of their safety. Before we could be on the road carrying passengers past 10 p.m., but now we try to wrap up and get home by 8 p.m. and this makes us lose up to 30 percent of our daily earnings.” The taxi driver said that he and many of his colleagues have also observed that there are not many passengers on the road anymore after 8 p.m., possibly because everyone is afraid.

A 45-year-old civil servant from Borno State, the center of the Boko Haram conflict, who moved his family out of the state in 2008, during the early stages of the crisis, said he is concerned with the insecurity playing out in the federal region because it looks a lot like the beginning of the crisis in Borno state, with worrying spates of attacks and threats: “If the government does not take necessary action, the FCT will boil over and everyone will run out like we ran from Borno state to find safety in other places.”

Confidence MacHarry, the Lead Security Analyst at SBM Intelligence, an organization that follows Nigeria’s security issues, said that the security situation in the federal region is worse than it has ever been, even in comparison to the earlier days of the Boko Haram conflict when places like the United Nations office in Abuja were attacked.

He said this is because there are now more groups apart from Boko Haram posing threats and the security forces are stretched thin in trying to respond. MacHarry also said that the authorities use words like “bandits” or “terrorists” to sweep various groups under the same cover, rather than specifically identifying groups so that they can formulate appropriate responses.

In response to the attacks and threats, the Inspector General of Police has deployed more officers to the area, and the Federal Executive Council approved 2.6 billion naira (US$6.2 million) for vehicles and equipment for security agencies operating there.

Despite huge budgetary allocations to the country’s security sector in recent years, the security forces remain poorly equipped, while corruption scandals continue to emerge. The security forces have also been implicated in gross human rights abuses, including arbitrary detention and extrajudicial killings, while responding to security crises across the country, and have repeatedly failed to hold officers responsible for the abuses accountable through the justice system.

“The Nigerian authorities should ensure adequate security measures are in place to keep citizens safe, pursue the attackers, and bring those responsible to account in accordance with human rights laws,” Ewang said. “Anything short of this will spur more grievances against the government, which may worsen an already tense situation and fuel additional cycles of violence.