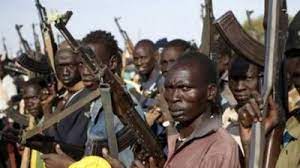 THE district head of Wawa community in Borgu kingdom in Borgu Local Government Area of Niger State, Dr Mahmud Ahmed Aliyu, has been abducted from his palace by gunmen. The incident is reported to have taken place Saturday night.

The gunmen were said to have stormed the palace in large numbers on motorcycles, wielding different weapons.

It was gathered that the gunmen went straight to the traditional ruler’s apartment where he had already retired to and whisked him away on motorcycle.

Meanwhile, Secretary to the Niger State government, Ahmed Ibrahim Matane, on Sunday confirmed the abduction of Dr Aliyu to newsmen in an interview by telephone.

The SSG, who maintained that the state government was not resting on its oars as far as security is concerned, added that combined security agencies and members of vigilante group had been mobilised to rescue the traditional ruler.