Grazing Routes for Fulani Herders: What the Land Use Act says 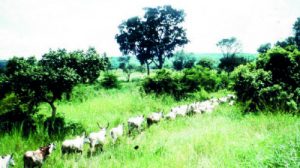 The farmer-herder attacks in Nigeria entered a new phase of policy direction between the federal government and state governors as the Presidency revealed it is reviewing the grazing routes across the country to reduce trespassing on plantations by herders which have greatly affected Nigeria’s food production capacity as more farmers keep away from their farms to protect themselves from marauding herdsmen attacks.

This also comes as the Southern Governors of Nigeria declared they will ban open herding in southern states with some states including Rivers State recently signing an anti-open grazing law.

Earlier this month, President Muhammadu Buhari ordered the collection of field data on the grazing routes to assess levels of encroachment, stakeholder engagements, and sensitization, based on the recommendations of a committee chaired by Ibrahim Gambari, Chief of Staff to the president.

“The number of the grazing reserves and states were deduced from considerations of existing security concerns and other pre-existing socio-economic conditions,’’ the Presidency disclosed in a statement.

“The Committee would also make recommendations for gazetting of ungazetted grazing reserves and create a database of National Cattle Herders and ensure that Grazing Reserves are well communicated to all stakeholders,” they added.

This recommendation comes after the President’s promise in June 2021 where he said “If you allow your cattle to stray into any farm, you will be arrested. The farmer is invited to submit his claims. The Khadi or the judge will say pay this amount and if you can’t the cattle is sold. And if there is any benefit, you are given and people were behaving themselves and in the grazing areas, they built dams, put windmills in some places there were even veterinary departments so that the herders are limited. Their route is known, their grazing area is known. So, I asked for the gazette to make sure that those who encroached on these cattle routes and grazing areas will be dispossessed in law and try to bring some order back into the cattle grazing.”

The recommendations so far from the Presidency have also been met with backlash from some Governors including Benue State Governor, Samuel Ortom, who said he may drag the Presidency to court if they go ahead with the policy of setting up grazing reserves and routes in the country.

“In the 50s, when this policy was initiated, the population of Nigeria was less than 40 million, but today we are more than 200 million. The 923 square kilometres are not even enough to cater to the population. The reason Mr President is insisting on this, to some of us, I think shows there is a hidden agenda.

“Under my watch, Benue State will not accept open grazing. I have already briefed my lawyers should Mr President insist on going ahead with the policy,” Ortom said, citing the authority of the Land Use Act which gives Governors the final rights on land use in states.

It is clear the recommendations by the Presidency’s Committee would be met with legal action going forward, even after a report by the Director of Department of Animal Husbandry Services at the Federal Ministry of Agriculture and Rural Development, Winnie Lai-Solarin, urging there were 415 grazing reserves in Nigeria, created by the National Grazing Reserve Law, in 1965. The 415 grazing reserves were located in 21 states, with 141 of the grazing reserves gazetted. Out of the 415 grazing reserves, only two are in the South, one each in Ogun and Oyo states.

However, as the Benue State Governor, Samuel Ortom stated, the Land Use Act under the constitution gives Governors the power to challenge land laws legally.

Prince Nwafuru, a Nairametrics columnist, international trade lawyer and Commercial Dispute Resolution & Litigation Team Lead at Paul Usoro & Co opined that the Land Use Act provides that, the control and administration of land are vested on the State Governor of the State where the land is situated.

The reach of the FG’s power over land in Nigeria

Nwafuru said, “The right and control over land in Nigeria by the various tiers of Government is spelled out under our laws. Reference should be made to the Constitution of the Federal Republic of Nigeria, the Land Use Act, the Federal Capital Territory Act and other legislation in that regard. Starting from the Constitution, the Federal Government has rights over all land where there are mineral resources in Nigeria.

“Both the Constitution and the Federal Capital Territory Act also vests ownership and control of all lands in the FCT in the Federal Government. In relation to the lands within the States, the Land Use Act provides that, the control and administration of land are vested on the State Governor of the State where the land is situated. Hence, the States have control over the ownership, use, development, and administration of land in Nigeria.

The legality of past grazing routes

“The controversy around the existence of grazing routes and the legality of same came because of the need to find a solution to the constant farmers/herders clashes in Nigeria and the recent declaration by the Southern Governors banning open grazing. For me, the issue is not whether there were in existence grazing routes in Nigeria at some point,” Nwafuru says.

“The more important issue is the legality of such grazing routes under our current legal regime. In other words, can the Federal Government hide under such anachronistic legislation (if any) to take over lands from the States? I do not think so going by the express provisions of the Constitution and the Land Use Act,” he adds.

He also noted that Reference has been made to a Grazing Law of the Northern Region of Nigeria (Law of 1965) which applied only to the defunct Northern Region.

“Some have argued that it is an existing law by virtue of Section 315(1) of the 1999 Constitution and Section 4 of the Land Use Act, 1978, However, this law applies only to the States in Northern Nigeria. And secondly, the Federal Government cannot administer this law as grazing route is not a matter under the exclusive list in the Constitution.”

“Equally important is the fact that for the Federal Government to take over any land from the States in line with section 28(4) of the Land Use Act, it must be shown that the land is to be used for public purposes.

“Although the definition of “public purposes” under the Land Use Act includes obtaining the land required for or in connection with agricultural purposes, it is arguable that the term “public purposes” extends to taking over private lands to establish grazing routes or ranches for the rearing and grazing of cattle by private individuals. This is where the issue becomes more interesting.

“For me, the way forward is to allow States to adopt the ranching method as a way to solve the farmers/herders crisis rather than going the grazing routes which, as I have shown, may be hampered by a lot of legal bottlenecks,” he opined.

Ikemesit Effiong, Head of Research at geopolitical research firm, SBM Intelligence urges that a short-term solution over the next 5 years towards solving the issue is land reform which is critical.

“The Land Use Act must be completely and comprehensively amended. No other legal workaround is possible. It must be dispensed with,” he said.

The legality of the Land Use Act gives Governors the power to administer control over the ownership, use, development, and administration of land in their domain. However, the Constitution states that the FG can also administer control of land from states for public purposes.