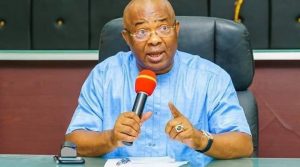 The governor made the announcement shortly after presiding over a meeting at the Sam Mbakwe Exco Chamber, Government House in Owerri, the Imo State capital.

The latest development comes two weeks after Uzodinma sacked 20 out of his 28 commissioners.

The state Commissioner for information and Strategy, Declan Emelumba, who confirmed the sacking, disclosed that the governor took the decision in the overall interest of the people of the state.

Emelumba said that a board the governor constituted had advised him to take the decision. The commissioner said, “Yes, the story is true. The governor took the decision following a recommendation by a board he constituted in this regard.  The idea is to make governance effective.

“The whole idea is in the best interest of the people of the state. There is no ill motive about it. The governor constituted a committee and it advised him in that direction. That is the whole essence of it.”

It was gathered that the affected aides were more than 100, some of whom have been with the governor since his days as a senator.