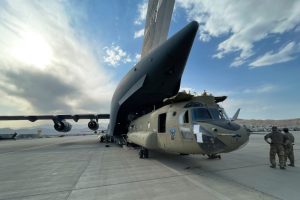 Final United States evacuation flight has left Kabul airport, officially ending the country’s 20-year war in Afghanistan, 24 hours ahead of schedule. It could be recalled that President Joe Biden had set an August 31 deadline to pull American troops out of Afghanistan before the Taliban took over amid last week’s twin explosions that killed 13 U.S. service members.

Commander of US Central Command, General Kenneth McKenzie on Monday announced that the US evacuated a total of 79,000 people, including 6,000 American citizens, from Kabul since August 14.

“Tonight’s withdrawal signifies both the end of the military component of the evacuation but also the end of the nearly 20-year mission that began in Afghanistan shortly after September 11, 2001,” McKenzie told reporters during a news briefing at the Pentagon.

He added that “every single American service member is now out of Afghanistan. I can say that with absolute certainty.”

The US forces commenced the evacuations on August 14 before the Taliban took over Kabul on August 15 with President Ashraf Ghani fleeing the country.

The General said the US had assumed that Afghan security forces would be a “willing and able” partner, but Washington had to start coordinating the evacuation efforts with the group after the Taliban took over.

“It’s important to understand that within 48 hours of the execution order, facts on the ground had changed significantly,” he said. “We have gone from cooperating on security with a longtime partner and ally to initiating a pragmatic relationship of necessity with a longtime enemy.”