Euro 2020: Belgium win as Finland wait to qualify for last 16 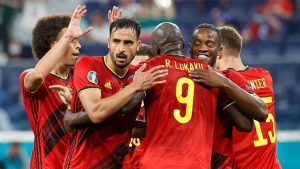 Belgium secured wins in all three group games at a European Championship for the first time with a battling victory that left Finland’s hopes of qualifying for the last 16 in the balance.

The world’s number-one ranked side dominated proceedings in St Petersburg but only led through a late own goal from Finland keeper Lukas Hradecky, before Romelu Lukaku drilled a second.

Finland slipped from second in Group B to third by virtue of Denmark’s 4-1 win over Russia in Copenhagen and they must now wait to see whether they qualify as one of the four best third-placed teams. The Danes go on to face Wales on Saturday in Amsterdam.

In their first appearance at a major tournament, Finland looked resolute and on course for the knockout stages until Hradecky turned a Thomas Vermaelen header over his own line after it came back to him off the woodwork, but they now look vulnerable in third given their goal difference is -2.

Four third-placed teams will reach the knockout phase and two – Switzerland and Ukraine – already hold better records than the Finns, with three more groups to be completed.

Belgium’s win also means England, the Czech Republic, Sweden and France are guaranteed to progress even if they drop to third because they all have four points already.

Belgium will play one of the third place finishers in Seville on 27 June and they look like fearsome opposition with one defeat in their past 26 matches.

Head coach Roberto Martinez made eight changes from their 2-1 win over Denmark and while his side only played with fluency in patches, they slowly wore down a disciplined side.

Finland keeper Hradecky was key in his side’s resistance as he produced fine saves to deny Jeremy Doku and Eden Hazard.

But when Vermaelen’s header hit the post Hradecky was helpless as the ball struck him to cross the line and seven minutes later he could do little when Lukaku smashed home from a Kevin de Bruyne pass.

De Bruyne’s contribution will please Belgium’s followers given pre-tournament fitness doubts after he fractured his nose and eye socket in the Champions League final.

The Manchester City midfielder had more touches than anyone on the pitch with 107, played more key passes (seven)than any player, and made a game-high five tackles.